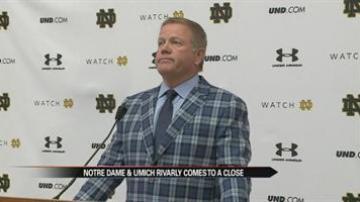 NOTRE DAME, Ind. -- The Michigan wolverines will be in town Saturday to play the Fighting Irish at Notre Dame Stadium. It will be the 42nd time the two teams meet - but it will also be the last as we know it.

"Certainly for me, it's an exciting game, one that gets everybody's attention," said Notre Dame Head Coach Brian Kelly.

"I think it was alluded to earlier, these are the two winningest [sic] programs in college football and that's for a reason," said Kelly.

Michigan is one of only 4 schools that holds a winning record against the Irish.

"Michigan, Michigan State, those games obviously were the big games when I was at Grand Valley State and Central Michigan. We played in the cloud, or we were in the shadow if you will, of those games," said Kelly.

Both teams are coming off big wins in their season openers-and looking to keep the momentum going.

"I think two good programs that have such great pride, that they're going to battle and fight to the very end," said Kelly.

Although this is the last scheduled meeting-in the near future between the two powerhouses, Kelly wants his team to stay focused on the big picture.

"Both teams want to win this football game and that's why regardless of what the team's records are and what the personnel looks like, there's just great pride in both programs," said Kelly.

But the Irish are 4-0 against the Wolverines under the lights at Notre Dame.