NOTRE DAME, Ind.—A team of researchers at the University of Notre Dame are working to cut the test time for biomarkers used to detect diseases early, outlined in a new study published in Nature Communications Biology.

Co-lead of the study, David Go, the Rooney Family Associate Professor of Engineering says the team has basically developed a device that analyzes blood plasma that looks for biomarkers seen with cancer and a number of other diseases.

“It’s a single small device that does all of the processing that you need to work with these exosomes, and detect the microRNA they carry and shrinks the time down to just 30 minutes,” Go said.

The process normally takes about a day and a half altogether. 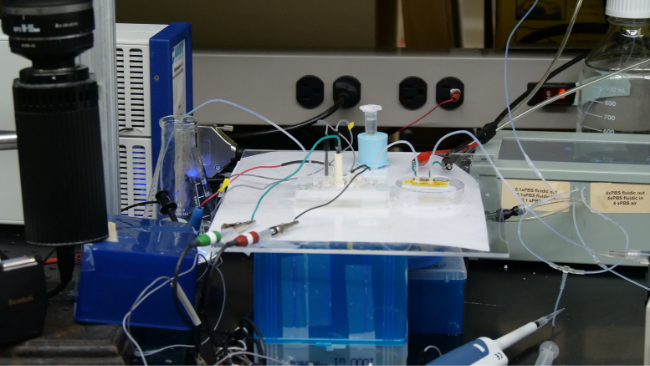 The microchip device cuts the time needed to perform a diagnostic test from a day and a half to 30 minutes.

Go works on the project with his co-lead Hsueh-Chia Chang and a Notre Dame team, as well as researchers at the University of Southern California.

Researchers in California have demonstrated that the technology works and now will test the new device in clinical trials with both human and mouse liver cancer samples with the hope of showcasing the tool’s potential in the field of medicine.

“Cancer is a devastating disease. It affects families worldwide and a lot of challenges with cancer is that you can’t detect it until it’s too late,” Go said.

Go and his team are already working with companies to commercialize the technology, even licensing out the device to a local startup located in South Bend’s Innovation Park.

A complex technology for a widespread problem

An estimated 38.4% of men and women in the United States will be diagnosed with cancer during their lifetime, according to the National Cancer Institute.

Postdoctoral researcher in chemical and biomolecular engineering, Zeineb Ramshani, spends many hours in the research lab in Notre Dame’s Stinson Remick Hall working on the technological side of the project that improves diagnosis time.

Ramshani says the device’s potential will save more lives and open up the opportunity for doctors and researchers to test more people.

“Instead of just doing one single experiment like we used to do in the past we can do more than eight experiments in a day so it’s going to be monitoring more and more patients,” Ramshani said.

The process involves the use of an integrated microfluidics platform to analyze extracellular vesicles (EVs) containing microRNAs as biomarkers for earlier disease detection.

The screening tool enhances conventional methods of analysis and even uses a smaller blood sample size.

Ramshani believes the device has the potential to become portable in the future, increasing access to those in developing nations where hospitals are far away and doctors are not available in the closest village.

"It can help diagnose people who have economical challenges and geographical distances," Ramshani said.

Still not sure how the technology works? Watch the video below for a short explanation of the process from Ramshani.