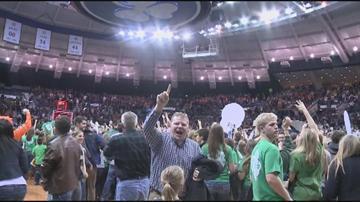 NOTRE DAME, Ind. – Fighting Irish Fans had a full plate over the past weekend. The university sold out five games, in just four days, between three different sports. Four of those games happened with in just over 24 hours of each other.

Even at a school as well-known for sports as Notre Dame, this isn’t common.

"I don't think, that many games, within a short period of time, you have hockey, had two Women’s Basketball, had two Men's Basketball Games,” said Women’s Basketball Director of Operations Stephanie Menio.
The chain of sold out events started Friday when Notre Dame Hockey faced rival Michigan at the Compton Family Ice Arena. The Irish got the win in front of 5,022 people in the stands with a final score of 3-1.
"It was awesome, especially the ‘White Out Game’ where the fans were great and they really got into it,” said Irish Defenseman Sean Lorenz.
Then Saturday Men and Women’s Basketball joined the packed schedule of events.
First up Coach Muffet McGraw’s squad put on a show in front of the first sold out crowd of the day.
The Irish beat Villanova 76-43 in front of 9,149 people packed into Purcell Pavilion.
Then just a few hours later the Men’s Team dished up the upset of the weekend beating No. 1 Syracuse 67-58.
Fans said the packed house kept the energy level high during the entire game.
"With everybody jumping up and down, everybody with the t-shirts on, everybody just going crazy for every play, I got a headache about half way through, but I had to keep going,” said Notre Dame Sophomore Tim Brazelton.
Brazelton was one of thousands that stormed the court when the final buzzer rang, which wasn’t just a highlight for the fans.
"I’ve never felt better than that before in my entire life. It was amazing. It was one of the happiest movements of my life,” said Irish Forward Jack Cooley.
To top off Saturday’s stacked schedule, hockey met Michigan again on the ice, but fell short losing 2-1.
The university said many of the Irish fans probably caught more than one of the games in the short time frame.
“People are leaving the game, coming back in, staying for all three events, going from one game to another, so it’s just a lot of energy on the Notre Dame Campus,” said Menio.
But Irish fans weren’t done just yet.
Monday night’s match up between Women’s Basketball and No. 9 Tennessee added the fifth sell-out of the streak. Irish beat the Vols 72-44, the lowest scoring in Tennesee history.
Fans said that’s what’s great about being an Irish fan, is that there are plenty of games to choose from.
"It’s great to have so many great sports teams that you can go to at a daily basis,” said Brazelton.
Notre Dame said there's select tickets left for all of the sports for the rest of the season so if you're interested in getting in on the action, get your tickets, before they're gone. Again.
Share this article: