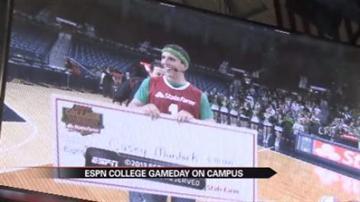 "This one takes the cake for it. Half-court shot made to end it. It was awesome," said Craig Goralski, Penn high school senior.

That half-court shot was banked off the back-board by senior Casey Murdock.

"I found out about 10:30 that I was going to be doing this and I did it about 11:50," said Murdock. "And I was texting everyone. I put it on Facebook, I put it on Twitter, everyone was watching so this was just surreal."

The senior finance major scored an $18,000 check. He plays basketball casually with friends, but never thought it'd one day help pay off his tuition.

"I actually didn't practice for this at all," said Murdock. "I've made half-court shots before but never sat down and practiced for hours."

His approach: float the ball to the hoop.

"When the first one bounced off the rim I thought 'alright, I'm on line. I can do this' and sure enough the next one," said Murdock.

"It was one of those things where before it happened everyone was saying 'oh he's not going to make that-like nobody ever makes these and second ball in- it goes right in," said Tylor Mondragon, Notre Dame marching band, alto saxaphone.

Goralski says he hopes Notre Dame's team can score as easily as Murdock did.

"I'm pretty sure this was one of the first times that they charged the court during a TV show so that was awesome and with basketball you're so much more closer."