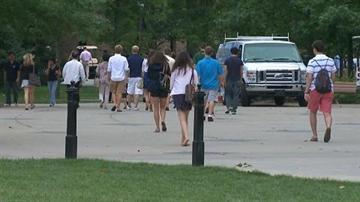 Matt Simpson was minding his own business when the phone rang on his desk just before 2:00 p.m. Tuesday. It was his wife on the other end of the line asking if he was feeling something strange.

Looking up at a swaying coat hanger perched on a hook on his wall, Simpson wasn’t sure. Then he felt it; the building lurched and for an instant he hoped the 130 year old building his office was in would stay standing.

“The sensation [was] similar to hitting an air pocket when you’re riding on an airplane, where suddenly something happens; something moves that your body knows is not a good feeling that doesn’t feel right,” said Simpson.

Then as quickly as it started it was over, as if it had never occurred in the first place. Simpson, his wife and millions of others here in South Bend and across the eastern portion of the United States had just felt an earthquake.

Its epicenter was in Virginia more than 600 miles from Notre Dame, where Simpson’s office is located. While seemingly impossible, experts say it’s not.

Unlike quakes generated in southern California, those occurring in the Midwest and on the east coast can be felt up to four states away. It’s all because of ground composition.

In California, the ground is rocky. In this part of the country a softer soil is found. This softer soil allows for the transfer of energy and motion earthquakes throw off.

Like ripples on a pond, waves of energy roll across the land. Some tall buildings, if their design resonates with the frequency of that rolling wave of energy, will actually sync up with it.

According to experts, that’s when a lurch or shudder can be felt. “If the buildings own internal dynamics resonate with that quake then it will amplify the motion,” said Tracy Kijewski-Corren, an associate professor of Structural Engineering at the University of Notre Dame.

For those like Kijewski-Corren who watch seismic activity as part of their jobs, Tuesday’s event is an exciting opportunity. “It helps us to not have to make the case based on what seems like fiction to the population,” said Kijewski-Corren.

She says warnings of potential dangerous quakes don’t register with people until they experience one. “Now that they are starting to happen, it prompted the USGS to revise its forecast for the probability of a major quake,” said Kijewski-Corren.

The current forecast calls estimates a 50 Percent chance of a magnitude six or higher earthquake hitting our area sometime in the next 50 years or so, according to Kijewski-Corren. It could strike at the New Madrid Seismic Zone near St. Louis, Missouri or Memphis, Tennessee.

But a 50-50 chance is not good enough for some when it comes to new building and design standards. “The problem is you’re at a delicate impasse between economy and what it would cost to design buildings to a California standard, without the guarantee that this event would even happen in the next 50 years,” said Kijewski-Corren.

Still, Kijewski-Corren hopes the warnings are heeded. She points to Haiti as an example of what can happen when a society is caught by surprise. “We would be completely off-guard if we got a major event out of that fault, and there would be no lying about [this]; we don’t design for that currently.”

Just looking around the university, several buildings could be a danger should a major quake hit the area. “These older masonry structures, unreinforced masonry, even if the primary structure makes it… the facades can peel off very easily. These bricks can come crumbling down. Those can cause just as much injury and damage than if the whole structure came down,” said Kijewski-Corren.