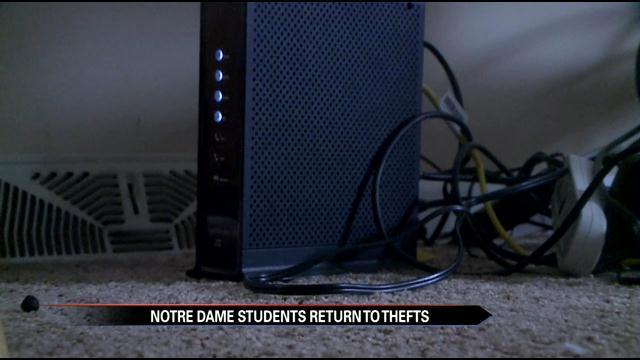 Some students who returned to campus after winter break came back to an unpleasant surprise - their homes were burglarized.

The suspects used book bags and hampers to haul away some of the smaller items.

Walters' next door neighbor Ryan Lindquist says three televisions, two Playstations, and a set of golf clubs were taken out of his home,

They took precautions before leaving for break.

"My roommate and I actually hid our golf clubs, they found mine, they didn't find his," said Lindquist.

Walters says police have suspicions that someone with a key may have found their way inside since there were no signs of forced entry.

Despite their losses these students say they still feel secure but it is uneasy knowing someone has walked through their personal space.

The students are aware of the risks when leaving  for extended periods of time like during winter break.

A Notre Dame spokesperson said before long breaks the University sends out e-mails telling students to take the necessary precautions before leaving town.