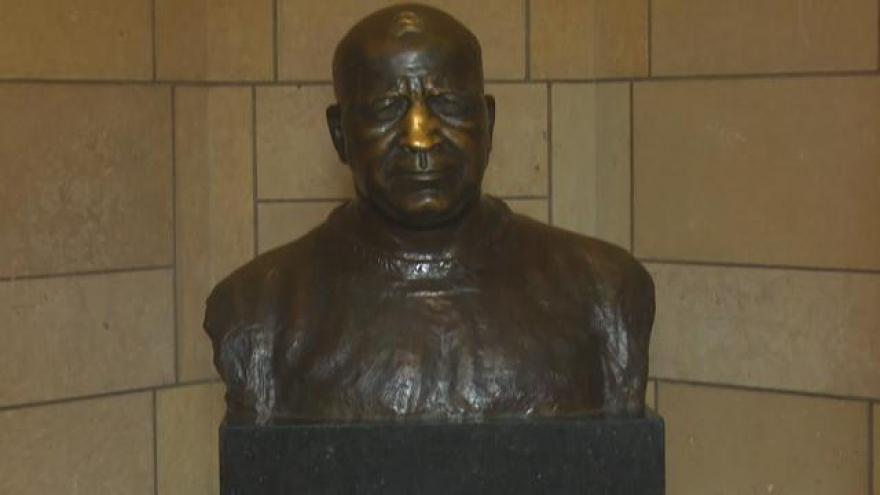 Some traditions of which you’re probably aware are players hitting the “Play Like a Champion” sign and fans doing push-ups in the stands after touchdowns.

You first met Maddisen when she showed us the student superstitions lurking around campus.

But if you’re a fan, there are some rituals you can do to guarantee a Notre Dame victory.

“So this is First Down Moses. One of our traditions here is to rub his toe before a game, and if we rub his toe, we’re going to be guaranteed a win at the football game,” said Brennecke.

Moses must have gotten a good shoe shining last week with Notre Dame’s win over Syracuse.

But, he’s not the only Notre Dame legend losing his lucky color.

“One that I’m not sure a lot of people are aware of involves Knute Rockne. There’s a bust of Rockne in the building that’s named after him in the south quad. The bust is bronze, and it’s dark, but the nose is very shiny, because the superstition is that you rub Rockne’s nose for good luck,” said Notre Dame University spokesman Dennis Brown.

“I’ve made sure to go into Rockne memorial gym, and rub Rock’s nose. I mean, it can’t hurt, right?” said Brown.

And there’s one more way superstitions make a splash on campus.

“This is the fountain that we run through if we have a wonderful game, if we just beat someone by a large amount,” said Brennecke.

Like the last time Notre Dame faced off against Michigan, where they won 31 to 0.

“That was the end of a long series of Michigan. So pretty much the entire student section came through and ran all the way through,” said Brennecke.

And on Notre Dame's campus, Halloween isn't the only day you dress up.

Each dorm has a game day getup.

“My dorm had a tradition of wearing our little black dresses and lions’ ears right before the first pep rally,” said Brennecke.

The luck of the Irish even transcends to the team.

Mike McGlinchey, an imposing six-foot-seven, nearly 300 pounds lineman is actually a bit of a teddy bear.

“I have to talk to my mom before I get on the bus to go to the stadium,” said McGlinchey.

“I eat the same exact thing before, you know, we played an early game, and I was eating chicken and pasta at like 8am last weekend,” said Onwualu.

And he does something else that will tug at the heartstrings.

“I always tweet out a little something for my brother, and I text him a little something, so just to know that I’m out there playing for him, and everything he’s done for me is why I’m fighting and playing that day,” said Onwualu.