Notre Dame to play Purdue for 85th time this weekend 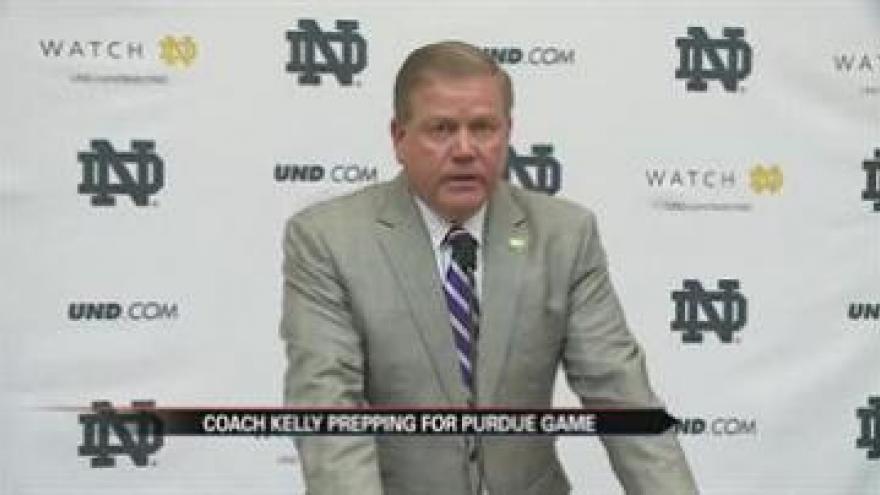 SOUTH BEND, Ind. -- The Fighting Irish are coming off of a tough loss to the Michigan Wolverines and are getting ready to take on another Big Ten team - the Purdue Boilermakers. Head Coach Brian Kelly said win or lose, there's always room for improvement.

Kelly said last weekend's loss against Michigan was due to lots of mistakes - and the team is learning from them this week.

He said the players are looking forward to getting back on the field this Saturday.

Kelly said this week is another chance to get on the field and prove Notre Dame holds the key to success this season.

"Well, any time you lose, you want to get back out on the field. Our guys will get an opportunity to get back to work, and you know, obviously there's a number of things we've got to get better at. We're playing another Big Ten opponent in Purdue," said Kelly.

"Offensively, Akeem Hunt started off last week's game with a kickoff return. He was an integral part of their offense. You know, certainly, Rob Henry back, experienced Big Ten performer. So they have had some big wins and play great competition," said Kelly.

Like last week, Notre Dame is going up against what Kelly says is a physical and experienced defense.

"Defensively, a very solid front four. I think that's a strength of their defense, led by Bruce Gaston. Ricardo Allen is a corner that's been there, a kid that competes. We've seen him for a number of years, veteran corner. And then again, up front, Ryan Russell," said Kelly.

The Boilermakers, like the Irish, are 1 -1 on the season-and the fact that this game is a long-time Indiana rivalry ups the ante for both teams.

"Coach Hazell has been very successful as a head coach, and certainly we'll have a challenge on our hands. This is an in-state rival that plays very well against us. We just need to look to last year's game," said Kelly.

This Saturday will be the 85th time the Irish and the Boilermakers meet, the most times Notre Dame has faced any Big Ten team.