Notre Dame/USC more than just a rivalry for these brothers 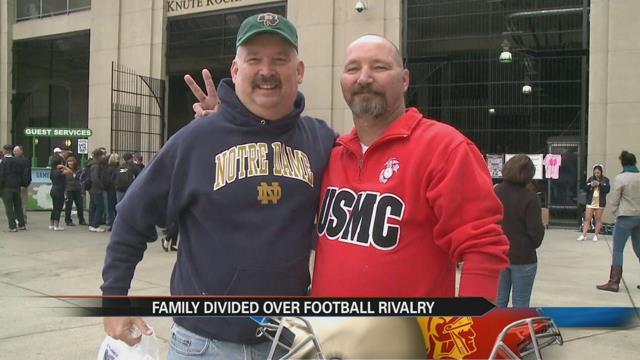 For some college football fans, Notre Dame versus USC is more than just a game. For Bill and Steve Smith, it's an all out family feud.

Steve lives in Virginia, Bill in California. The Notre Dame/USC game literally brings them together.

And they say there’s no love lost despite their conflicting allegiances.

Both brothers grew up in a Trojan household in California. But Bill decided to stray away from the pack.

"Since I was a kid I've been a Notre Dame fan," said Bill Smith. "Ever since I can remember."

But for Steve, his allegiance never wavered. He lives in Williamsburg, Virginia.

And Irish fan Bill has his loyalties questioned day in and day out by family and friends as a USC employee.

"It's kind of fun to go home and stick it to them now and again," said Bill Smith.

Win or lose, the two will be parting ways at the airport. Meaning the trash talking will have to end once they each board separate flights heading to opposite sides of the country.