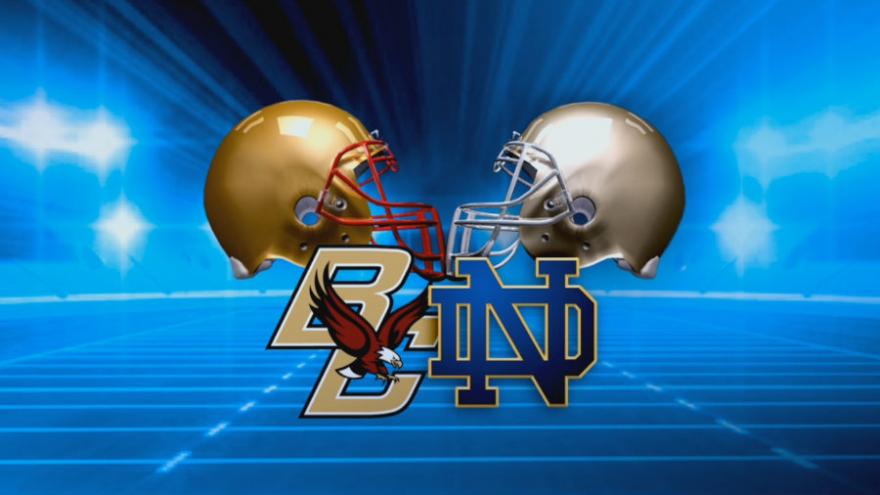 Notre Dame won the coin toss and chose to get a look at the Eagles’ offense to start the game.

The first few possessions of the game would be uneventful until BC’s AJ Dillon fumbled the ball at Notre Dame’s 21-yard line, but the Eagles would recover.

That drive set them up for a field goal. Boston College would lead 3-0 with just under 8:00 to go.

On the following Irish possession, ND running back Josh Adams would rush for a huge gain of 65 yards to BC’s 2-yard line. On the next play, it would be a quarterback keeper. Brandon Wimbush would run the ball in to put the Irish on top. Yoon’s kick was good and the Irish went up 7-3 over the Eagles with 6:28 left in the first quarter.

Notre Dame would keep its 4-point lead to end the first.

The top of the second quarter would fare well for the Eagles. Seven successful plays would lead BC's quarterback, Anthony Brown, to complete a 22-yard pass to wide receiver Charlie Callinan in the endzone. After the kick, Boston College took back the lead 10-7 over Notre Dame.

On the next possession, the Irish would go for it on 4th and 5, but Wimbush scrambled to the BC 31-yard line where the Eagles would take over and ultimately punt the ball away on 4th down.

With just under 3:00 to go, Adams found a gap and ran the pigskin for another 65 yards only to be followed by a penalty and an incomplete pass on the next couple of plays. On 2nd down, Wimbush would keep the ball towards the endzone but would fall short of the goal line. He tried again on 3rd and goal, inside the 1-yard line and tacked on another six points for his team.

Right before the end of the half, a pass intended for ND's Equanimeous St. Brown was tipped and intercepted by the Eagles' Lukas Denis.

The teams would go into halftime with Notre Dame leading 14-10 over the Eagles.

Just three minutes into the second half, Wimbush fumbled the ball on 1st and 10 and that would render to be ND's second turnover of the day. The Eagles would take over at the Irish 32-yard line.

The Eagles would take advantage of the situation by kicking a field goal and making it a 1-point game. Notre Dame still leading 14-13 with 11:13 to go in the third quarter.

With 4:20 to go in the third, ND's possession would start with a 15-yard penalty due to a personal foul, but followed up by a big gain from Adams and connection to tight end Durham Smith to get the Irish in scoring position. Wimbush would scramble but find his way to the endzone. Yoon's kick would be good and the Irish would widen the gap 28-13.

At the start of the fourth quarter, Wimbush would soak up the spotlight. In just his third collegiate game, he racked up four rushing touchdowns. He run the ball for 65 yards to score. After the extra point, Notre Dame pulled further away from Boston College at 35-13.

The Eagles would be sure to keep up with the Irish. A 15-play drive would pay off with just over 13:00 to go in the game. Brown would hit his man Callinan for 14 yards and a TD. The kick was good and Boston College makes a small debt in the deficit. ND 35, BC 21.

On BC's next possession, the carrier would fumble and Notre Dame's Shaun Crawford would recover the ball. ND took over at their own 35-yard line. The fumble would lead the Irish to a touchdown as Dexter Williams pushed through the crowd and into the endzone. Yoon's kick put the Irish farther ahead 42-20.

The same situation happened on Boston College's next possession. Brown intended to hit his man Callinan but the ball landed in the arms of Crawford again. ND would be in control at the BC 33-yard line with just over 6:00 to go.

Dexter Williams would run the ball into the endzone for the final TD of the game. Notre Dame wins 49-20.

This is story will continue to be updated throughout the game.