NEXT:
EAST LANSING, Mich. – The 79th match up of the historic rivalry continued at Spartan Stadium where the Notre Dame Fighting Irish would spar with the Spartans of Michigan State University.

Michigan State would begin the game choosing to defer the Fighting Irish. On Notre Dame’s first possession, it would only take two minutes for the Irish to find the endzone. Irish QB Brandon Wimbush would find the hands of Equanimeous St. Brown for a 40-yard competition. Wimbush would keep it on the next two plays, running across the goal line. After the extra point, ND would take an early 7-0 lead.

The Irish showed up ready to play in the first quarter.

On the Spartan’s following possession, six short plays would end with a pick-six for Notre Dame’s Julian Love who intercepted MSU’s pass at the ND 41-yard line. He would take it for a touchdown, too. Justin Yoon kicked the extra point and the Irish would be in control of the first five minutes of the game. ND 14, MSU 0 with 10:33 to go in the first.

Not to worry, the Spartans would be sure to stick a spear in the Irish. After six plays, MSU Quarterback Brian Lewerke would put his team in scoring position. He completed a pass to Darrel Stewart Jr. who would take it into the endzone for a TD. Notre Dame would still be in control as the Spartans get on the board. ND 14-7 with 6:33 to go.

Notre Dame would keep the lead 14-7 at the end of the first quarter.

The start of the second quarter was messy: A questionable late hit, flags flying, false starts, incomplete passes, and missed opportunities plagued both teams. However, the inconsistency worked out for the Irish with just over 10:00 to go in the half. MSU's Leweke scrambled behind the line and ultimately lost control of the ball. Notre Dame recovered the fumble and took over at the Sparty 24-yard line.

With 9:38 to go and the play clock winding down, Wimbush shoots a bullet of a pass to Dexter Williams in the corner of the endzone. Yoon kicked the extra point and the Irish would take a 21-7 lead.

A few possessions later, MSU would be forced to turn it over to the Irish once again. Cornerback Shaun Crawford pops the ball out of MSU's LJ Scott and forces a fumble just before the goal line. Crawford recovers in the endzone and the Irish would benefit from a touch back on the ensuing drive. This would be the Spartans' third turnover of the game.

Notre Dame's Josh Adams ran the ball for 30 yards but a personal foul on Sparty would tack on an extra 15 yards for the Irish. Williams eventually fought through a croud, found a gap, and took it in the for the touchdown. The Irish clearly in control of the game with a 28-7 lead with under 4:00 to go in the half.

The teams would remain at 28-7 with ND in lead headed into halftime. 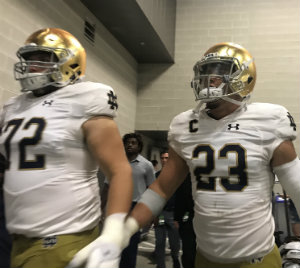 Michigan State would come out strong out strong on their opening drive of the second half. Spartan kicker Matt Coghlin would tack on three with a field goal. Sparty tried to inch closer, but ND kept the lead at 28-10.

The Irish just couldn't stop running in circles around MSU's defense. With just under 8:00 to go in the third, the Fighting Irish would cash in on a lengthy drive as ND's Deon McIntosh ran the pigskin 9 yards for another touchdown. Notre Dame did their jig as they went up seven points for a 35-10 lead.

Most of the fourth quarter was quiet until the Irish added insult to injury with about 9:00 left in the game. An 8-play drive towards the goal line would end with ND's Justin Yoon kicking the ball through the uprights to add on three. ND would keep their trend going, leading 38-10.

ND tacks on FG. LEAD 38-10. Just a complete game from the Irish tonight.

MSU tried to scrape up any points they could squeeze out of the dominating Fighting Irish. With just under 5:00 in the game, completes four passes to his receivers and on the fifth, Leweke connected with Holmes for a Spartan touchdown. Michigan State went for the 2-point conversion and made good on it. Sparty adds to their score, 35-18 with ND still in the lead.

Notre Dame would go on to defeat the Michigan State Spartans at Spartan Stadium 38-18. The Irish improve their record to 3-1 for the season.

Dexter Williams in to the Locker room: “We got the megaphone back”. Irish dismantle MSU 38-18. @ABC57News@ABC57SatKickoffpic.twitter.com/oBIgN8LEFc

These two teams will not meet again until 2026, so the Irish go out with a huge win over a sought-after rival heading into their next game at home against Miami of Ohio.