NOTRE DAME, Ind. -- The Notre Dame Fighting Irish set to square off with the Wolfpack of North Carolina Saturday afternoon at Notre Dame Stadium. Both teams came into the game with 6-1 records, looking to tack on another win.

The Wolfpack would be first on the board just five minutes into the first quarter. On 4th down for Notre Dame, punter Tyler Newsome's punt is blocked and recovered in the endzone by NC State's Kelvin Harmon for a touchdown. After the kick, the Wolfpack would lead ND 7-0.

Notre Dame said, "no way." On the ensuing drive, after just one play, QB Brandon Wimbush connects with his man Durham Symthe who easily took the ball in for an Irish TD. They would tie up the game, 7-7, with just under 10 minutes to play in the first. 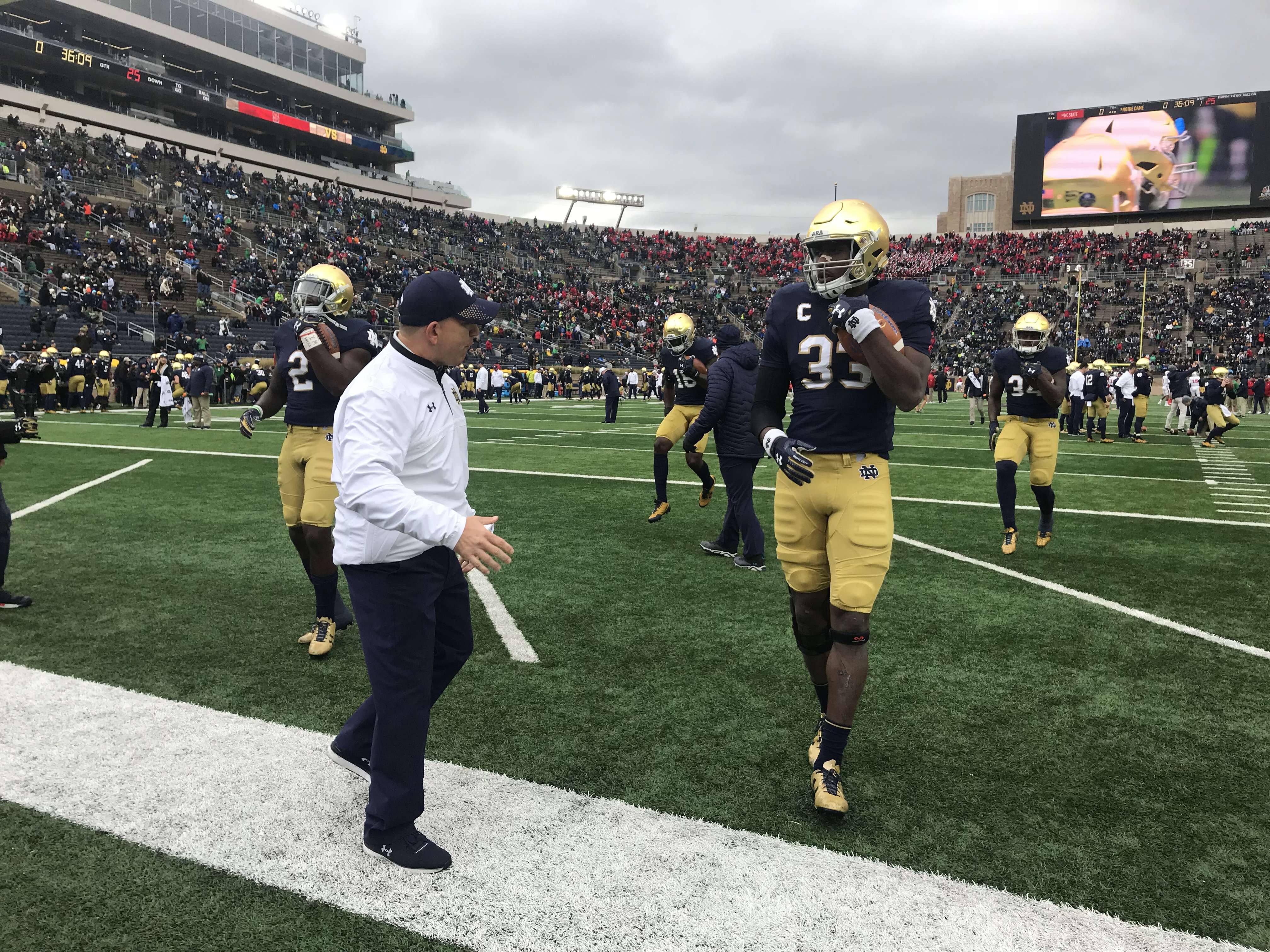 Most of the quarter would be plagued by penalties for both teams but NC State would benefit at the top of the second quarter. A 7-play drive for 71 yards ended with Wolfpack QB Ryan Finley connected with Harmon again for their second touchdown of the game. NC State would rack up another point with the PAT and they would go up 14-7.

Notre Dame would continue with their trend of playing catch up. With just over 9 minutes to go in the half, a 17-play drive would result in an Irish touchdown despite an unsportsmanlike conduct penalty on Chase Claypool and multiple stops. Brandon Wimbush would run the ball in and they would tie up the game at 14.

With about 5:30 left in the half, Wimbush connected with receiver Kevin Stepherson on an 11-yard pass to the endzone. It was originally ruled out of bounds. However, after an official review, the call was reversed and ND would take the lead for the first time in the game. ND 21, NC State 14.

The teams would go into halftime with ND in the lead 21-14.

Finley's interception-free streak would end as ND's Julian Love intercepts Finley's pass for a 69-yard pick-six ND would lead by two scores four minutes into the second half.

What a start to the half for #NotreDame, as Julian Love picks off Ryan Finley and returns it 69 yards for a TD. Irish up 28-14.

Notre Dame would be relentless in the second half. with just over four minutes to go in the quarter, explosive running back Josh Adams took it to the house. He went 77-yards for another Irish touchdown. Justin Yoon's kick was good and the Irish extend their lead 35-14.

The Wolfpack would hold off the Fighting Irish for the rest of the game, ultimately falling to Notre Dame 35-14.

Notre Dame improves their record to 7-1 on the season. They take on Wake Forrest at Notre Dame Stadium on November 4th.