NEXT:
PALO ALTO, Calif. -- The Fighting Irish were on the road, exactly 2,238 miles from South Bend, to take on the Stanford Cardinal at Stanford Stadium on Saturday.

It would be the last game of the regular season for the 9-2 Fighting Irish.

The Irish would be on the board first about 11 minutes into the game. On 3rd and 7 at the ND 17-yard line. Irish Quarterback Brandon Wimbush connected with his man Kevin Stepherson who would take the ball 83 yards to the house. After Justin Yoon's kick, the Irish would be up 7-0 over the Cardinal.

Boom! The Irish on a slant to Stepherson get on the board first. 7-0 ND. pic.twitter.com/valvqnS3MO

It would be back to back touchdowns by Stanford that would give the Cardinal the lead early into the second quarter. The ensuing drive following ND's touchdown, made for an 8-play drive and a Stanford TD when Quarterback K.J. Costello completed a pass to Trenton Irwin who ran across the goal line. The game would be tied 7-7 at the end of the first quarter.

The Cardinal took the lead during their first possession of the second quarter. On 2nd and 4, Costello connected with Wide Receiver JJ Arcega-Whiteside for another touchdown. The extra point was good and Stanford would be up 7 over ND at 14-7.

Notre Dame would try to tie the game by halftime but after several failed attempts to catch the ball, the Irish would settle for a field goal to tack on another three points making the score 14-10 Stanford at the half.

Right out of the gate the Irish would score to take the lead after halftime. On the second play of the drive, Wimbush would complete a pass to Equanimeous St. Brown who would take the ball six yards for a touchdown. The Irish lead again 17-14 after the kick.

That lead would not last for long as the Cardinal tied the game up with a rushing TD on the ensuing drive. With 10 minutes left in the quarter, the game was tied at 17. 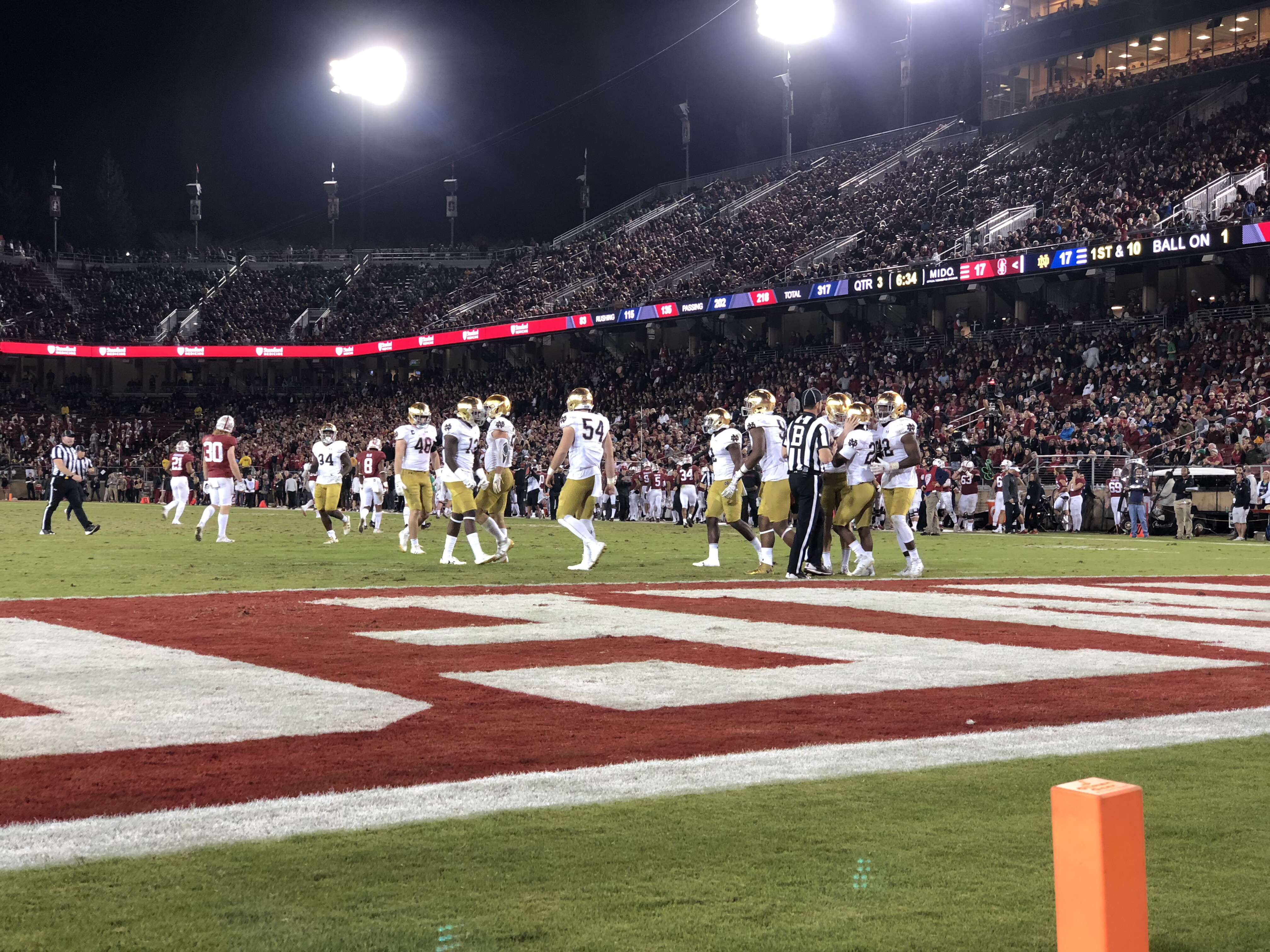 Stanford pinned within the the 1-yard line on a punt .

With 1:23 to go, the Irish would add another three points with a field goal by Yoon. Notre Dame took the lead back 20-17.

The Cardinal started off the fourth quarter with another touchdown on the third play of the drive. Costello finds a receiver to add on another six -- make it seven after the kick. Stanford 24, ND 20.

It would be the Cardinal prevailing in the fourth quarter. Wimbush's pass intended for C.J. Sanders was intercepted by a Stanford defender which ultimately led to a touchdown. The gap grows 31-20 with 12:21 left in the game.

On ND's ensuing possession, Sanders fumbled and Cardinal Malik Antoine recovered the ball and it would lead to another touchdown for Standford. They go up 38-20.

Turnovers would plague the Irish. A touchdown attempt by Wimbush would result in an interception in the endzone by a Cardinal.

All three turnovers were in within 10 minutes in the fourth quarter.

Finally, Notre Dame comes back with a touchdown. During the catch, the ball pops out of Chase Claypool's hands but he ultimately comes down with it. After a review, the refs decide it was not a touchdown and the call is reversed. the score remained at 38-20 with two minutes to go in the game.

Stanford would run the clock down and take the win 38-20 over the Irish.