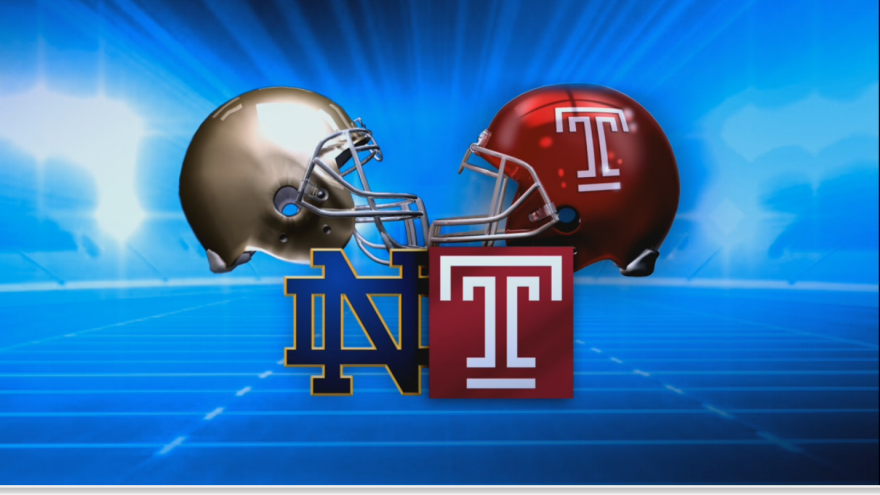 The Irish would be the first to receive the ball which is taken to the 28-yardline.

On the next play, ND Quaterback Brandon Wimbush connected with Equanimeous St. Brown for a gain of 32 yards which sets up Josh Adams to run it in for a touchdown just 33 seconds into the match.

Irish go up 7-0 over the Temple Owls.

Temple tried to answer within the next seven plays but their run ended in an incomplete pass and a punt with 11:25 to go.

With 8:00 left in the first quarter, Temple Owl Karamo Dioubate is hit with a personal foul, giving ND a 15-yard advantage and a first down.

Two plays later on 3rd and goal, Wimbush would keep it for himself and took the ball 8 yards for another Irish touchdown.

ND continued to lead the Owls 14-0 after the kick.

Temple finally broke into Irish territory with about 3:40 to go in the first. Three plays went by before the Owls' kicker, Austin Jones, put it through the uprights on 4th down.

Notre Dame would answer back louder on the next possession. On 2nd and 10, Wimbush completed a pass to Adams who just couldn't stop running. He would take it 60 yards before being pushed out of bounds at Temple's 12-yardline.

This would set up Wimbush's pass to ND Tight End Nic Weishar who took it 12 yards for yet another Irish touchdown. They widen the gap 21-3.

Notre Dame would lead 21-3 at the end of the first.

The top of the second quarter would not fare well for the Temple Owls.

The Irish, on 3rd and 6 near the goal line, caught a break when a penalty was called on Temple's Jullian Taylor for roughing up Wimbush during the play. 3rd down turned into a 1st down which turned into another Fighting Irish TD.  The kick was good and Notre Dame started to run away with it 28-3.

In the middle of the second, Temple would get hit with another penalty, making it three just in the first half.

The Owls picked it up with 6:00 to go before halftime. A long, 11-play drive down the field would set up Owl Quarterback Logan Marchi to connect with Keith Kirkwood for a 12-yard touchdown. After the kick, Temple added 7. ND would still be in the lead 28-10.

Notre Dame would make a field goal attempt with six seconds left in the half, but Justin Yoon would miss the kick and the teams would go into halftime with ND in the lead 28-10.

The start of the third quarter would remain uneventful for the first five minutes until ND's 7-play drive would force Justin Yoon to attempt a 47-yard field goal. The kick would be no good but the Irish remained in control, leading Temple 28-10.

This would be Yoon's second missed field goal of the game.

The first turnover of the game would be forced by the Owls. Wimbush's pass, intended for St. Brown, was intercepted by Temple's Mike Jones and ran for another 43 yards in the opposite direction. But the glory wouldn't last long. Marchi was sacked for a loss of 10 yards at ND's 19-yardline.

The Owls would attempt a 36-yard field goal, but miss.

With about four minutes to go in the third quarter, ND's Tony Jones Jr. fumbles the ball. However, the call is reversed and the Irish set up their next touchdown. Dexter Williams would take it 40 yards before Jones took it another seven to the goal line for a touchdown on the next play. Yoon's kick was good and the Irish did their jig. ND 35, Temple 10.

The start of the fourth would benefit Temple in their first possession. The Owls' Marchi would complete a pass to Brodrick Yancy for a touchdown. They attempt a 2-point conversion, but couldn't pull it off. Notre Dame would stay in control 35-16.

There would be 8:11 left in the game when ND's Nyles Morgan forced a fumble and Drue Tranquill picked it up for an Irish 1st down.

The Fighting Irish would end that drive with a touchdown as Adams racks up his second on the day. Irish lead 42-16 with just under six minutes to go in the game.

The Irish were on a hot streak. Seven touchdowns with just 2:22 to go. The Irish would send Dexter Williams to the endzone to tack on an extra six points. Yoon's kick would be good again.

The Fighting Irish didn't give a "hoot," they were all over this one. Notre Dame won 49-16.