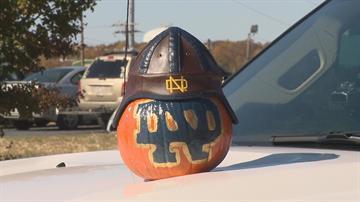 WINSTON-SALEM, N.C. – The University of Notre Dame knows a thing or two about traditions and on game day that means tailgating. Fighting Irish fans pulled out their tents and set-up shop at Wake Forest University for a full day of tailgating before Saturday’s night game against the Demon Deacons.

“I haven’t had too much interaction with Wake Forest fans because they’re just not tailgating right now. I guess they’re sleeping in today,” said Notre Dame Graduate Ian Mills.

Mills and his tailgating team were set-up by noon in an empty parking lot that had plenty of room for others to join. For the Irish, it’s just tradition.

“Tailgating is a tradition that runs through at Notre Dame. We’re out early and often,” said Mills.
Part of the tailgating pack was Jaime McCaughna who lives in North Carolina. She was just in South Bend for the USC game, but was happy the Fighting Irish came to her this time around.
“This is a lot closer for us that was a huge weekend but this is kind of home so we’re good to go,” said McCaughna.
For this November tailgate, McCaughna is traveling with something festive that she hoped bring the Irish good luck.
“If you’re going to be in South Bend or Wake Forest in October, November, than you might as well bring pumpkins,” said McCaughna.
These aren’t just your ordinary pumpkins, they’re covered in Notre Dame blue and gold, so were the Irish fans go, so do pumpkins.
“It started out as a pumpkin for USC and that didn’t work out so well, so we’re hoping for better at Wake Forest,” said McCaughna.
There’s no doubt this group of Fighting Irish fans will keep the traditions going, even if they do add their own touch of pumpkins.
Share this article: