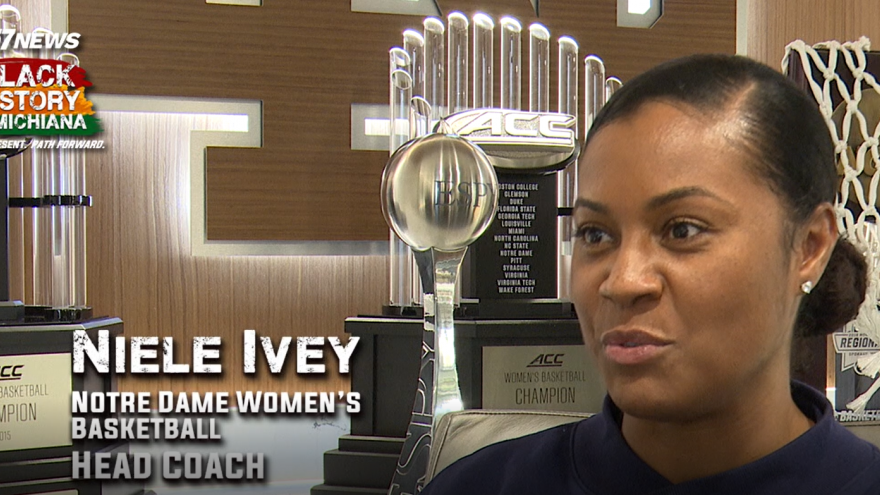 SOUTH BEND, Ind -- What some people see as a sport or a hobby is a source of inspiration and purpose for others, including Notre Dame women’s basketball’s newest Head Coach Niele Ivey.

Basketballs can be used to play the game or change the game and that’s exactly how Notre Dame Head Coach Niele Ivey hopes to use her platform to break barriers for those following in her footsteps.

"I never thought coming in as a 17-year-old student athlete as a freshman that I would be leading this program and taking over at the helm following such a legend as Muffet McGraw," said Notre Dame Women's Basketball Head Coach Niele Ivey.

Before scoring the head coaching job for the Notre Dame women’s basketball team in 202, it was all a dream for Niele Ivey.

A dream she already tasted way back when she was a player herself.

In 2001 when she helped lead the team to its first ever national championship scoring 12 points in route to a win over Purdue.

From there she went to play for the WNBA but she always knew she’d come back to Irish country.

She initially spent 12 years as assistant coach but that passion continued to challenge Ivey.

She began to strive for even more.

In 2019 Ivey broke another barrier becoming the first black female assistant coach for the Memphis Grizzlies of the NBA.

Making her the ninth active women’s assistant coach in the NBA at the time.

"So many women that messaged me that came to the games just to see me on the sidelines because it was trailblazing. It was groundbreaking to do it to be the first female assistant coach in the grizzlies. So fast forward, when i took over here at Notre dame being the first female black coach in any sport at Notre dame, I knew the magnitude of that because I just went through it. I felt proud," said Ivey

With that pride, came a purpose.

"I’m just happy that I was the person to blaze that trail because I want to give more opportunities to more women of color. More women in general," said Ivey.

But inspiring others takes its own inspiration.

"For young women, for girls, especially young black girls just for them to see me in this roll matters," said Ivey.

For Ivey that inspiration came in the form of Lusia Harris.

Harris to this day is the only woman ever officially drafted by the NBA.

She died unexpectedly at 66 earlier this year, but the legacy she left behind will continue to serve as a guiding light for Ivey.

"I wish I had the opportunity to meet her. She’s been a pioneer for women’s basketball in general and for her to be an African American woman is just incredible," said Ivey.

"She broke so many barriers for us and she paved the way. She was the beginning for us and to see it now, we are playing above the rim. We have so many more opportunities in the coaching and professional world. I feel like she probably only dreamed of playing in college and then she was the first to be drafted into the NBA," said Ivey.

Although Harris’ story helped her find her purpose, it’s not Ivey's individual accomplishments like becoming the first black woman to ever lead a team on Notre Dame’s campus keeping her in the game.

Instead it’s the impact she imprints on others.

"I know how I've been impacted and I've been inspired by my strong coaches, my mom, strong female role models. People in my life that have helped me, because I didn’t get her alone. I had a lot of people that poured into me and so I want to continue that impact. I want to impact the community, I want to impact my team and future recruits. Anyone that is looking at me, I take it, I take it very personal.

Coach Ivey helped the Irish win that 2001 championship title back when she played at Notre Dame, but don’t forget she was also part of the team’s 2018 title as an assistant coach.

She’s made seven final four appearances overall and is hoping to lead these ladies to another very soon.