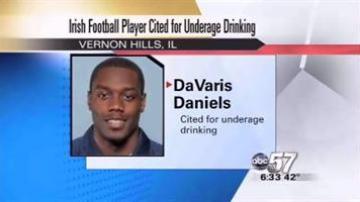 VERNON HILLS, Ill. -- Another Irish football player is in trouble with police.

The Chicago Tribune reports wide receiver Davaris Daniels was cited for underage drinking at his Illinois home over the weekend.

Daniels who will be a sophomore this fall was one of almost 30 people cited at the party.

They all were cited for being underage, but no one was booked. Police said the parents claimed they had no idea a party was going on.

Daniels did not play for the Irish last season.