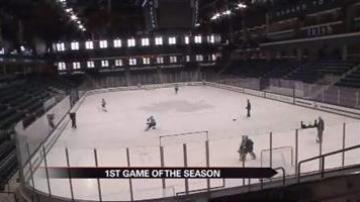 It has been one year since the Compton Family Ice Arena first opened its doors.

"It's absolutely beautiful. It looks like a great opportunity for both students and guests,” said Marina Kennedy.

Lannon made the trip to Notre Dame from Saint Paul, Minnesota.

"To come and watch UMD play Notre Dame because my grandson went to hockey camp at UMD,” said Lannon.

The Irish Icers will face off in their first home game of the season Thursday against Minnesota Duluth.

Although Lannon calls Minnesota home, she has some Irish ties making the game a win-win.

"I'll cheer for both of them. I'll enjoy watching the game that's the important part,” said Lannon.

Lannon certainly won't be the only one cheering tonight.

"It’s still fall break so we might be a little light on students tonight, but once we're back in session, you're going to see 5022 people here on most nights,” said Tom Nevala, Senior Associate Athletic Director for Notre Dame.

"This is a wonderful, wonderful hockey rink. We went upstairs and looked and it's just beautiful,” said Lannon.