Notre Dame's Joe Schmidt has a "no limits" attitude 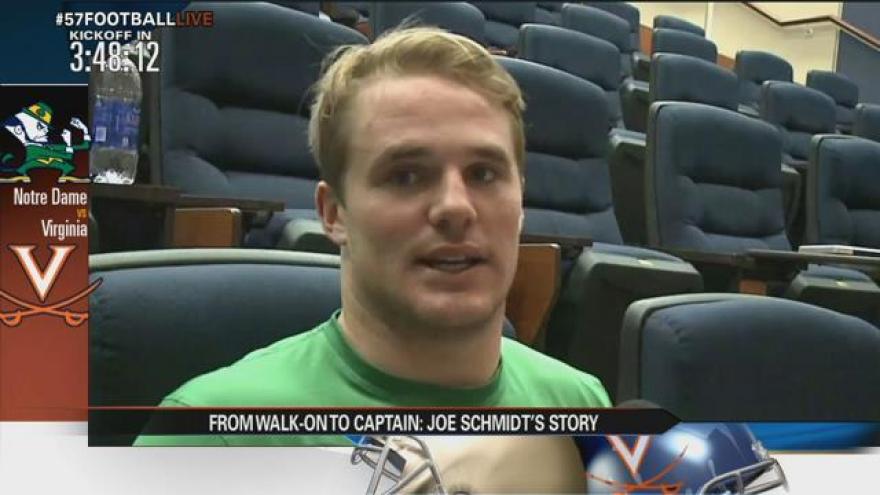 Joe Schmidt is one of Notre Dame's most resilient players. He worked his way up from a walk-on to starter to one of the team's most valuable players. How is he handling the pressure this season?

Fifth year linebacker Joe Schmidt has to live up to the hype as one of the most solid defensive players and vocal leaders for the Irish.

He said he's ready to take on and conquer yet another challenge at Notre Dame.

Joe Schmidt had no idea where he would be now when he first set foot on the campus of Notre Dame four years ago.

“Really there are no limits," Schmidt said. "The only limits that are on you are the ones that you put there.”

That no-limits attitude helped him fight from eager-eyed walk-on to starting linebacker for the Irish.

Now he is one of five captains named by Head Coach Brian Kelly.

For Schmidt, that "c" is a reminder to stick to the fundamentals that got him here: hard work, vocal leadership and remaining humble.

“I’ve just tried to be the same guy each and every day and not really let that change the way I interact with the guys on the team," Schmidt said.

The only thing that has changed? The number of wins under his belt in the last five seasons- now topping 38.

Kind of fitting for the guy who proudly takes the field with 38 on his jersey, along with that "C."

“I think really the only thing that changes is the title. I’ve tried to keep my approach very similar to how I was before that was announced," said Schmidt.

While he embarks on his final season with the Irish, he plans to take that 'walk on attitude' to his next challenge and encourages others to do the same.

“Find what you’re passionate about, find something that you’re dreaming for or dreaming about, or a high goal or something you want to reach, and then go after it with everything you have," Schmidt said.

For Schmidt a no limits take on life is the only way to live.

“If you do that, even if you fail, you’ve succeeded," Schmidt said.