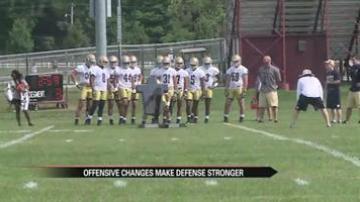 CULVER, Ind. -- Notre Dame Football team spent their fourth day at Culver Academies for their training camp. We asked how they are adjusting to their new defensive coordinator Brian VanGorder.

All the players had great things to say and added they were impressed with the increased intensity on both the offense and the defense.

KeiVarae Russell says he's happy that Everett Golson is back.

"They're definitely confident that when the ball goes deep he's going to put it there. They throw the back shoulder so well, I kept turning to the field, and you can't defend  the back shoulder to the field so let me just digress and go off of topic real quick. And tomorrow I'm going to turn to the receiver, he isn't going to get no more of those," said Russell.

He says it's nice to have a quarterback who can give his defense a run for their money in practice.

"They're both amazing coaches, both have different styles and I had a great time with both of them and I'm having a blast right now," said Schmidt.

With a new playing scheme and a new coach, Jaylon Smith said this season will be anything but ordinary.

And with all the transitions, he joked about the possibility of playing sideline to sideline.

"I believe I can do it all, it's really about your work ethic and being coachable so I'm here to do whatever it takes to win and be a team," said Smith.