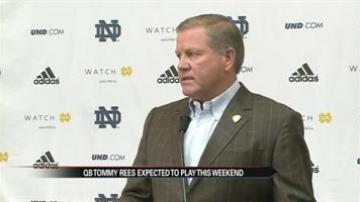 SOUTH BEND, Ind. -- At Brian Kelly's news conference Tuesday, the big topic of the day was Quarterback Tommy Rees' condition. Kelly says Rees has been cleared to practice and will be playing in Saturday's game in Colorado Springs.

Kelly says although Rees will be starting, second and third string quarterbacks Andrew Hendrix and Malik Zaire will be getting some reps in practice this week.

There were roughly nine minutes to go in the third quarter when Irish quarterback Tommy Rees was sacked by 6'2", 230 pound Trojan linebacker Lamar Dawson.

That sack left him on the sidelines for the rest of the game with a neck strain.

"I don't have the specifics for you. Our doctors have dealt with the necks. I mean, there are a myriad of different things that go into that," said Kelly.

That same sack left the Irish offense in the hands of second-string quarterback Andrew Hendrix-who went 0 for 4 on pass attempts in the second half against USC.

While Rees was in the game he completed 14 of 21 pass attempts for a total of 166 yards.

Rees is back on the practice field this week-but the coaching staff will keep close tabs on how he's feeling.

"We believe that Tommy's going to be ready. He was cleared today to practice so we're moving forward that he will be the starter," said Kelly. "When you're cleared on Tuesday, your first day of practice, I don't think there's any hesitancy to go out and play somebody when he's cleared so early in the week."

Just in case the Irish find themselves in a similar situation to last Saturday's-Kelly is making sure Hendrix and Zaire are spending some time on the practice field too.

"We'll get Andrew some first team reps and get Malik some second team reps and just make sure that he's functioning and progressing during the week," said Kelly.