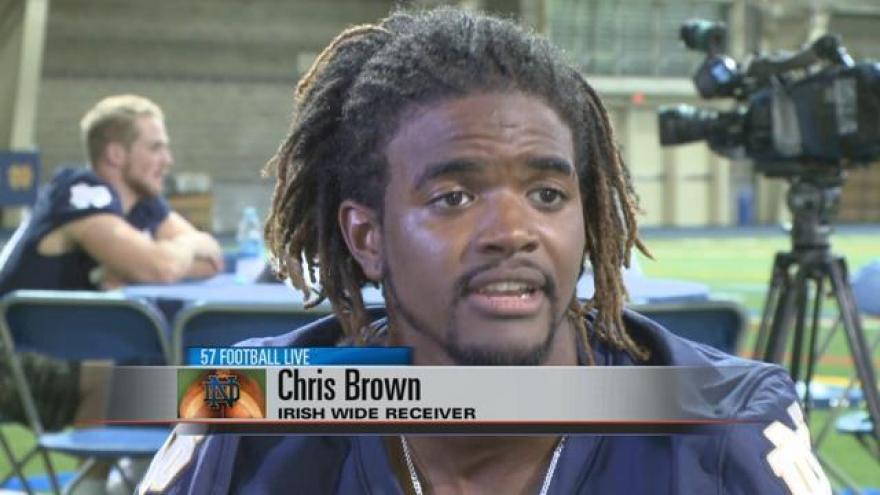 This year, the University of Notre Dame's football team has the talent to make 2015 an impressive season. A lot of the talent is within the wide receiver corps.

It's looking like the pieces of the puzzle are falling into place for Notre Dame's offense.

Head Coach Brian Kelly says he's got a strong offensive line, an exciting new quarterback in Malik Zaire, and perhaps one of his most dangerous weapons is his wide receiver corps.

Wide Receivers Coach Mike Denbrock has his hands full this season with a lot of talent.

"It's got the makings of a solid corps of guys and we can play at the tempo and speed we want to play at and we can interchange those guys and there's really no drop off," said Denbrock.

Along with skill, receivers like Will Fuller, Chris Brown, Corey Robinson and Amir Carlisle bring valuable experience too.

"We've got to continue to bring a few of those guys along so it's not just depth but it's quality, depth," Denbrock said.

Fuller led the Irish last year with more than 1,000 yards in the air and 15 touchdowns.

This year Denbrock expects even more from the six-foot - 184 pound junior.

"It's making every play that he's capable of making and showing that type of consistency that's going to lead to greatness," Denbrock said.

As if those four aren't enough, the Irish brought on four freshmen who seem to be on the fast track.

"They've come as advertised, if not better," said Denbrock.

All together these guys are complementary - a versatile and fast weapon.

"With competition, comes improvement, you want to become the best player you can be and you don't want to just be given anything," said Brown.

Another card in Notre Dame's favor- the lack of a pre-season quarterback battle.

"We know what the decision is already, so now we can simulate game simulation things and put the pressure on them," Denbrock said.

Because there's no question Malik Zaire is "the guy" Denbrock says they can enforce more game-like situations in practice.

"We can't get caught up in the fact that Malik is like a four-year returning veteran. We've got to continue to just give him as many situational things as we can, so that he can play the game more," Denbrock said.

With the season opener against Texas just around the corner, Brown says the pressure is on each and every day until kickoff.

"In our receiver room, we feel like we're the best receiver corps in the country, so with that being said, there may be a game where somebody gets some other catches but you're expected to make plays every single day," Brown said.

Another potential breakout receiver you'll want to watch for this season is Torii Hunter Junior.

He saw action in ten games in 2014 and had a touchdown for the Irish. With his versatility and athleticism, his coaches say they hope to see more from him this year.