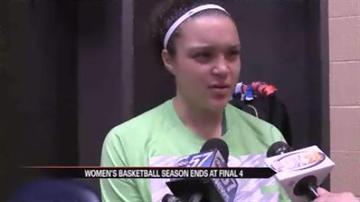 SOUTH BEND, Ind. -- They kept their fans on the edge of their seat for an entire season, but Sunday night the Notre Dame Fighting Irish women’s basketball team ended the season with their Final Four game against UCONN. Team members have returned to South Bend, but it isn’t the trip home the team wanted.

Heartbreaking and disappointing. Those are the words that best describe Sunday night's matchup between Notre Dame and UCONN as the Irish watched yet another national championship slip away.

"That's not the game we wanted to go out on, but you know I'm really proud of them, I wouldn't want to play with anyone else but it just wasn't our night,” said Kayla McBride, Irish guard.

For a team that averages 46 percent from the field, it was difficult to watch as they struggled to make 30 percent.

"Nothing was working. We couldn't get any confidence from executing, we got a couple of back doors, we thought oh, here we go, we're going to run our stuff and then we just crashed and burned,” said Muffet McGraw, the Irish head coach.

The Irish stuck with Huskies through most of the first half and led by one with about 3 and a half minutes remaining.

But UCONN went on a 15-2 run in the last three minutes of the half to give Notre Dame a 10 point deficit heading into the locker rooms.

"You know we weren't doing little things. Offensive rebounding, they were getting transition layups and offensive rebounds and things like that and they added up and they got their ten point lead at half time and we tried to cut it down, but we ran out of time,” said McBride.

The Irish shot better in the second half but struggled to get defensive rebounds.

And with UCONN freshman Breanna Stewart knocking down 17 points in the second half alone, Notre Dame's chances for a comeback dwindled away.

"I mean it's going to hurt for a while. Especially the fact that we've been to three Final Fours and haven't been able to convert to a championship. But it's definitely going to hurt but we'll just use it as motivation again for next year,” said Irish forward Natalie Achonwa.

The Irish finished the season 35 and 2 but with this as their third straight Final Four appearance the Irish have now established themselves as a consistent Final Four contender.