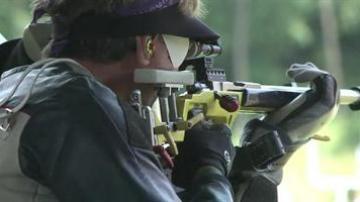 BRISTOL, Ind. -- The National Rifle Association is hosting the National Smallbore Rifle Championship in Bristol at the Wa Ke' De Rifle Range. The event draws hundreds of contestants from all over the world.

The contestants include gold medal Olympians, expert marksmen from the US Army and collegiate athletes.

The competition is fierce - the difference between winning and losing can be less than a millimeter.

Competitor Greg Drown's story is a bit different than other entrants. a lifelong shooter, he did it competitively for Ohio State University and qualified for the Olympic trials in 1984.

Then, in the late 1990s, he developed Multiple Sclerosis.

"Disabled or able-bodied, certainly, everybody has a chance here," said Drown.

Competitor Katie Bridges' skills earned her a scholarship to TCU and an invitation to an upcoming international competition.

"Go and compete with the guys and shoot just as good or better," said Bridges.

They're just a few of the competitors at the event.

"Not only is it physically demanding, it's mentally demanding as well," said Staff Sergeant George Norton, Army Marksmanship Unit.

Norton knows what that feels like. He won the NRA nationals in 2008.

He says this sport requires discipline and composure.

The targets are less than 10.5 millimeters wide.

"I'm the best that the Army will show you, along with all my other teammates, but that doesn't mean I'm not inferior to the junior shooter that's out here," said Norton.

For the town of Bristol, with a population of 1,600, the competition means national exposure.

But more than that, it's a chance to grow the sport locally.

"It's patriotic. You want to get on the stand and hang that gold medal around your neck and run the flag up and play the National Anthem. That's what it's all about," said Lones Wigger, who is in the Olympic Hall of Fame.