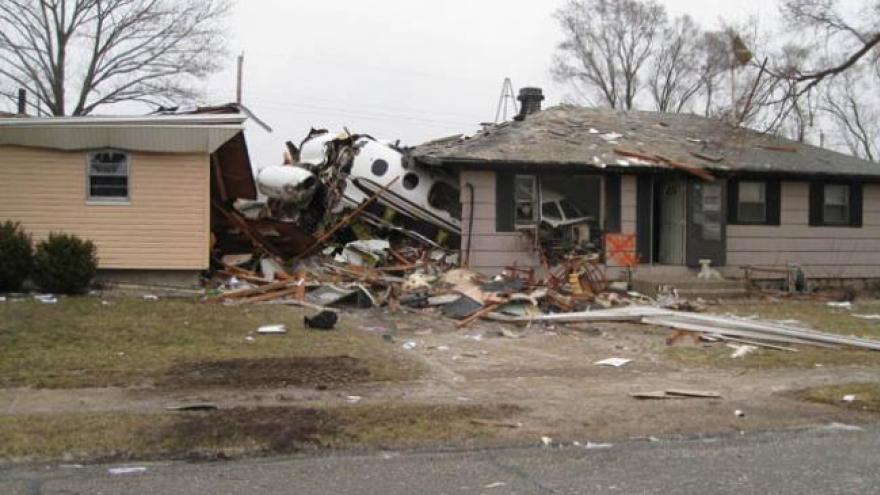 The National Transportation Safety Board attributed the March 17, 2013 plane crash in South Bend to pilot error.

The plane crashed into three homes on North Iowa Street at approximately 4:30 p.m. after an aborted landing attempt.

Jim Rodgers, Christopher Evans, Wes Cave and James Steven Davis were on board the plane.

Cave and Davis were killed, Rodgers and Evans were seriously injured. A person on the ground was also injured.

According to the NTSB report, pilot Cave allowed an unqualified pilot-rated passenger to take the controls under his supervision.

Davis was the pilot-rated passenger and was not an employee of the plane's operator, but was a friend of Cave's.

According to the report, Cave told Davis to reduce engine power and both engines were shut off.

At one point, one of the engines was restarted and Cave attempted to land the plane, but the main landing gear was not extended.

Cave went around South Bend airport and attempted another landing. The plane bounced several times on the runway, then entered a climbing right turn. The plane then entered a nose down rolling descent into the neighborhood and crashed into three homes.

The NTSB report says the pilot failed to reset the generator to reestablish electrical power to the essential bus. If he had done that, all plane systems would have operated normally. Instead, the plane was likely operating on the standby bus, which would have prevented the normal extension of the landing gear.

The NTSB said the landing gear alternate extension handle was only partially extended, which would also have prevented the main landing gear from extending.

The NTSB says if Cave had fully extended the landing gear, the plane could have landed with just one engine.

In conclusion, the private pilot's decision to allow the unqualified pilot-rated passenger to manipulate the airplane controls directly resulted in the inadvertent dual engine shutdown during cruise descent. Additionally, the pilot's inadequate response to the emergency, including his failure to adhere to procedures, resulted in his inability to fully restore airplane systems and ultimately resulted in a loss of airplane control.