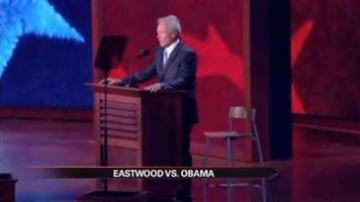 The Obama Administration had a little fun with comments made by actor and director Clint Eastwood at Thursday's RNC.

"What do you want me to tell Romney? I can't tell him to do that," Eastwood said. "You can't do that to himself. You are absolutely crazy... You're getting as bad as Biden."

During is speech, Eastwood used an empty chair as a prop for a fictional conversation with the president.

Last night on Twitter on Obama's official Twitter Page, a photo of Mister Obama sitting in a chair, marked with a nameplate saying "The President" was tweeted.