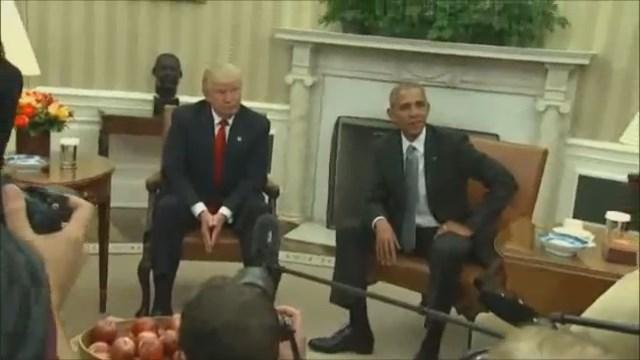 Obama told reporters that if Trump succeeds, America succeeds at a White House meeting that encapsulated the stunning political events of the last few days since the President-elect's remarkable election victory.

Trump said he would seek Obama's counsel as president and Obama promised his full cooperation in the transition period.

The President-elect¹s first visit to Washington as the President-elect began around 10:30 a.m. when the plane emblazoned with his last name landed at Reagan National Airport, marking a new beginning for America.

Trump is also scheduled to meet with House Speaker Paul Ryan and Senate Majority Leader Mitch McConnell while in town. He is traveling with Vice President-elect Mike Pence, who will meet Vice President Joe Biden.

The Trump-Obama meeting was unexpected just days ago. The core of Trump's campaign was his claim that Obama is incompetent. Obama, meanwhile, had mocked Trump on the campaign trail.

But in the immediate aftermath of Tuesday's results, Trump and Obama have both sought to set politics aside ahead of the transition.

Trump struck a magnanimous tone first, praising rival Hillary Clinton -- who he had said on the campaign trail he would imprison -- during his election night speech.

"We owe her a major debt of gratitude for her service to our country," Trump said, complimenting her long history of public service.

He also reached out to those who hadn't voted for him.

"I pledge to every citizen of our land that I will be President for all of Americans, and this is so important to me. For those who have chosen not to support me in the past, of which there were a few people, I'm reaching out to you for your guidance and your help so that we can work together and unify our great country," Trump said.

On Wednesday, Obama also recognized Trump's victory, and said he plans to ensure a peaceful transition of power.

"We are now all rooting for his success in uniting and leading the country," Obama said. "The peaceful transition of power is one of the hallmarks of our democracy. And over the next few months, we are going to show that to the world."

Throughout Obama's presidency, Trump persistently sought to undermine the legitimacy of the nation's first African-American presidency by questioning his citizenship and his Christian faith.

"He doesn't have a birth certificate. He may have one, but there's something on that, maybe religion, maybe it says he is a Muslim," Trump told Fox News in 2011. "I don't know. Maybe he doesn't want that."

When Obama -- attempting to put a stop to the falsehood -- released his "long-form" birth certificate from Hawaii in April 2011, Trump continued to claim it was somehow faked.

It took until September 2016 -- two months before a presidential election in which he was already the Republican Party's nominee -- for Trump to admit the reality that Obama was, indeed, born in the United States.

And when he did so, it was only in a brief statement with no explanation of why he'd changed his long-held belief, aside from saying in interviews later that he wanted to get the question off the table in the heat of the campaign.

Obama has directed his own barbs at Trump, too.

At the 2011 White House Correspondents Dinner, with Trump in the audience, Obama mocked Trump's birtherism -- joking that "no one is happier" Obama had released his long-form birth certificate.

"He can finally get back to focusing on the issues that matter -- like, did we fake the moon landing? What really happened in Roswell? And where are Biggie and Tupac?" Obama said of Trump.

He also cast Trump as incompetent and unhinged on the campaign trail, citing a New York Times report that Trump's staff had taken his Twitter account away from him after a 3 a.m. rant about former Miss Universe Alicia Machado.

"They had so little confidence in his self-control, they said, 'We are just going to take away your Twitter.' Now, if somebody can't handle a Twitter account, they can't handle the nuclear codes," Obama said at a Sunday rally for Clinton in Florida.