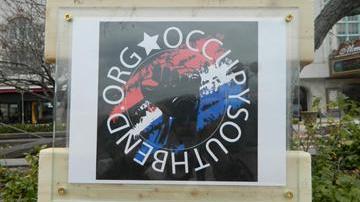 Those in the group decided to pack up and end the physical protesting of the movement. A reason to end the public demonstration wasn't immediately available.

The group started protesting against corporate greed downtown the first week in October. When the group started they had over 100 protesters on the ground. The group gained quite a following on Facebook with more than 500 group members.

"We have to be nimble and be able to change as the situations require us to...so that we can do the good work we set out to do. We Occupied, - our point was extremely well made - now we have to keep the narrative going by reinventing ourselves - the mission does not change - we still want justice for the 99%" on the members posted Tuesday on Facebook.

The protest, most recently, was being held outside the Morris Performing Arts Center. A member of the group told ABC 57 News that they were not allowed to protest during the Beauty & the Beast performance this weekend - it's unclear if that played a role in ending the protest. That member also told ABC 57 News that there was some concern by city council members about the continued protest.

Regardless the group feels strongly about their message and make it clear on their Facebook group page that just because the demonstration may be over, that their beliefs and their mission isn't ending.

Sunday members of the group met to discuss the possibility of joining other occupy movements, like Niles and Elkhart and become "Occupy Michiana." The group decided against merging with other demonstrators. Niles and Mishawaka were thought to be possible locations for the demonstration.

There is no word on what the next move may be, there is a discussion on their page about a possible rally that would involved all members of the community.