Occupy South Bend may be ending and regrouping for larger momentum 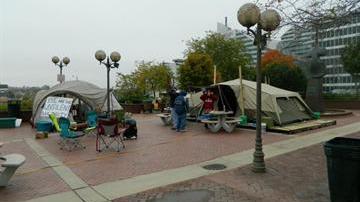 SOUTH BEND, Ind. - Members of Occupy South Bend held and emergency meeting Sunday at 3 p.m. to discuss ending the protest downtown South Bend and moving it to a more central location, according to a source within the movement.

A final decision has not been made at this point.

According to our source there is discussion about ending the protest downtown and joining forces with other Occupy movements across the area and become one occupy that would be called, "Occupy Michiana."

We're told that the possible towns under consideration for the movement would be Niles or Mishawaka.

Occupy South Bend started October 8th with about 100 members. Since then they have been occupying downtown 24/7 with on and off numbers in support. Currently they are set up near the Morris Performing Arts Center.

We have a crew at the meeting right now and will continue to pass along details as we get them.