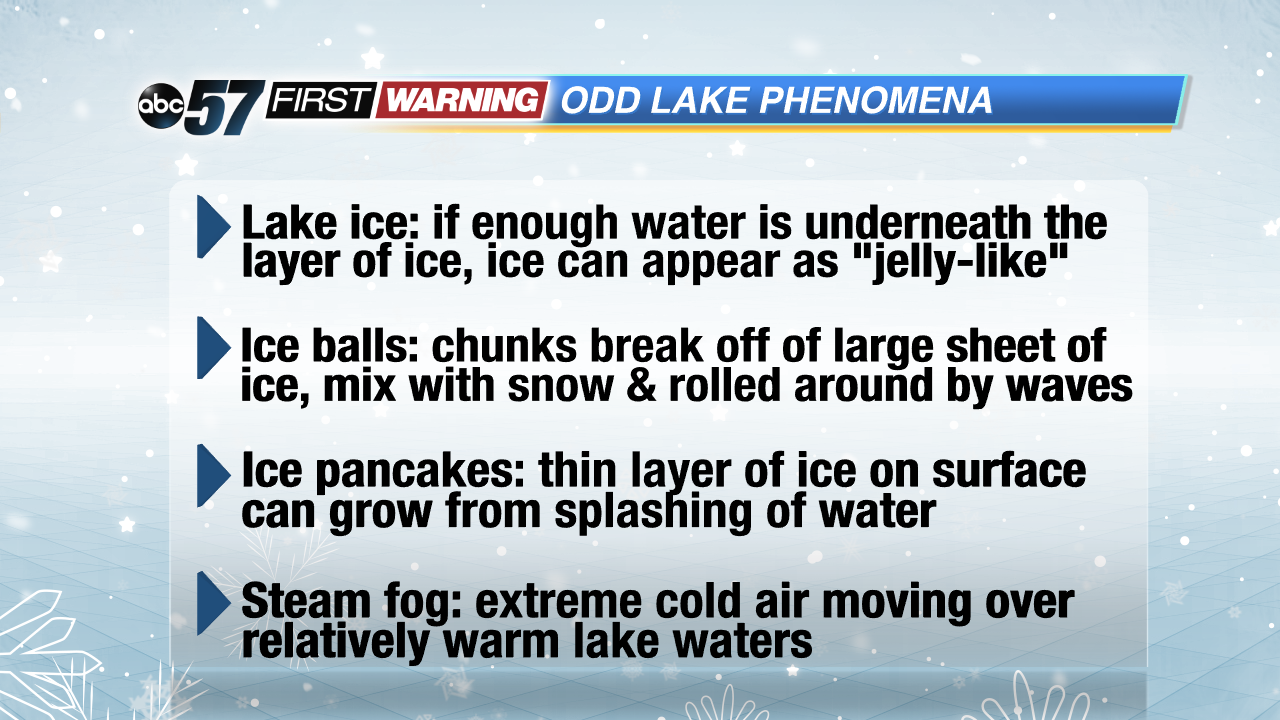 Some odd things have been happening lately on Lake Michigan thanks to the arctic air that has been in place since Christmas Eve. Lake ice forming atop the water in Chicago resulted in a "jelly-like" look. There have also been reports of ice balls near Muskegon. Those are both featured in the attached video as Meteorologist Tyler Sebree discusses what is happening. Other phenomena like ice pancakes and steam fog can happen on lakes as well. The big question is, "what exactly are these things?"

The jelly-like look that Chicago witnessed can be explained by a layer of ice forming on top of the water. The water underneath the icy layer was still moving, causing the layer of ice to move in the same manner the water was. Think about it. When water moves, it takes on a wavy movement as it churns back and forth near the shore thanks to wave after wave. Add a layer of ice to that wavy-like movement, and the ice simply takes on that trajectory. That is also why the ice sheet appears to be breaking in multiple locations; the movement of the water in a wavy fashion broke the ice sheet into numerous pieces.

Ice balls and ice pancakes can be put into the same category. Both form as a result of extremely cold temperatures and ice development on larger bodies of water. Ice balls form when chunks of ice break off of a larger sheet of ice and mix with snow before getting rolled around by waves. They can wash up on shore, or remain several hundred yards from the coast.

Ice pancakes are a little different. When the temperatures are extremely cold, a thin layer of ice can develop atop the lake water. As water splashes, and as the thin layer of ice collides with other icy features, additional ice can result in what looks like a lily pad made out of ice.

One other feature that Lake Michigan can experience is steam fog. Most of us have probably witnessed this on smaller lakes across Michiana. This happens when arctic air rushes over relatively warm lake waters and interacts with the warm, moist layer of air just above the water. When dry, frigid air collides with relatively warm and moist air, you can get the formation of this steam fog.

So, the next time you are around Lake Michigan, or another body of water, be on the lookout for one of these wild features! You never know what you'll see when you venture to the lake!