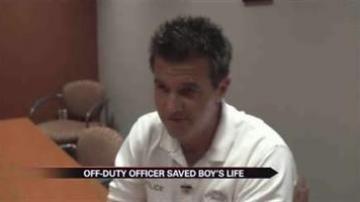 SOUTH BEND, Ind. -- New details are emerging after a young boy was nearly killed in a freak accident on Wednesday night.

South Bend police said they got a call saying a 4-year-old got his head stuck in a car window and wasn't breathing.

An off-duty police officer heard that call and raced over to the scene. It all unfolded on East Calvert Street.

When the officer got there, he managed to clear the boy's airway and get him breathing again.

The officer, and hero, told us he was afraid the child wasn't going to live.

"Picked him up, and I carried him into the front yard. He was like a soggy french fry. He was... nothing. I just held him there and monitored his airway, and kept him breathing until the ambulance got there," recounted Det. Sgt. David Beaty.

We also spoke to the little boy's mother. She said that he is doing fine and took him for another check-up at the doctor. She also said that she was very thankful as well that the officer got there as quickly as he did.