Officer bitten by dog while responding to call near Battell Park 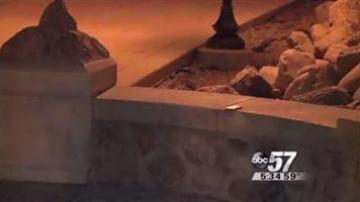 MISHAWAKA, Ind. — A family walking along Mishawaka's River Walk called police after they came across a group of men they claim were smoking marijuana.

Dion and Jennifer Collins were at the Riverwalk Sunday evening with their five kids.

Eventually they came across a group of men sitting along the Riverwalk who they thought were smoking marijuana, playing with a pit bull and swearing in front of their children.

"As we approached we could smell marijuana in the air and their language was vulgar," said Dion Collins. "We saw my niece and went to talk to her. As we talked to her, we told her to go home."

Eventually, the Collins family left, except they told a police officer about the marijuana.

After police got there, the family heard two gun shots. And then saw a group of men surrounding the dog.

"It's pretty harsh for a three-year-old and a six-year-old to hear a gunshot ring out at a park," said Jennifer Collins. "It scared them."

The officer was treated for multiple bite wounds.

No drugs were found on anyone in the group, but one person did run from the scene.