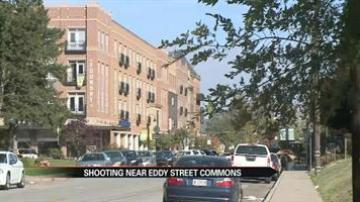 SOUTH BEND, Ind.-- Police are searching for a suspect who shot an individual on North Eddy Street Saturday night. According to witnesses, officers were trying to break up a large fight when it escalated.

Sam Novario said, “We heard screaming outside and multiple gun shots. There were ambulance sirens and police sirens everywhere.”

Novario was in the Foundry at Eddy Street Commons when he heard a big fight happening just before 3 am.

Novario said, “I assumed it was an average bar fight but then we realized it was much more.”

One person was shot during the chaos but their injuries were not life threatening.

Novario said, “I wouldn’t be too scared this close to campus but obviously there’s problems that can creep in.”

Officers were trying to help the victim when more shots were fired by the suspect into the crowd.

Investigators told ABC57 that the suspect fled in a light colored full-sized SUV.

Notre Dame student Stephen Hill said, “The road was blocked off from Brothers all the way down to here.There were a lot of police cars out and a lot of lights.”

Hill says a lot of his friends live near North Eddy and Vincent Street.

Hill said, “People walk to and from the bars all the time down this road.”

One Notre Dame graduate said this isn’t the first time something like this has happened.

Nathan Solomon said, “I don’t know how much more security can do. It’s just random acts of violence. I think it’s endemic to more than just having policemen around.”

David Sagan says he watched the fight unfold from his window.

Sagan said, “I think they do a good job keeping an eye on Brothers, keeping police units out there when it's busy and an important weekend. The officers responded pretty quick!”

If you have any information they are asking you to call Crime Stoppers.