Officers involved in the Martin's Supermarket shooting to be honored 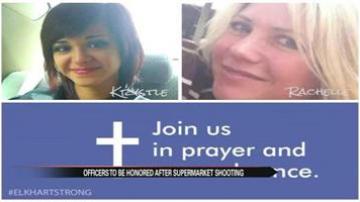 ELKHART, Ind.-- The officers responsible for taking down the Martin's Supermarket shooter will be honored this Wednesday. It's been almost six weeks since 22-year-old Shawn Bair allegedly entered the grocery store and killed two women inside.

According to Indiana Representative Tim Neese, Corporal Jason Tripp and Cody Skipper will be hailed as heroes.

“It took about a minute for those two officers once they arrived to ascertain who was in danger, who wasn’t, and then unfortunately they had to take the life of that gentleman because there was a knife and a gun turned on them,” Neese said.

Neese reached out to both officers inviting them down to Indianapolis to be honored.

“In both instances they answered the phone and I could hear small children in the background and it became very real to me that they were in a life or death situation and that they are dads. Only in America could something like that happen” Neese said.

The investigation has been handed over to the prosecutor.

“This was a situation where the gun had been properly registered to a different individual but still he had access to it. So I think a lot of this goes back to the home life. The gun should not have been made accessible. I don’t know if it was stolen, but one can’t be too carerful when we are talking about weapons and people’s lives," Neese said.