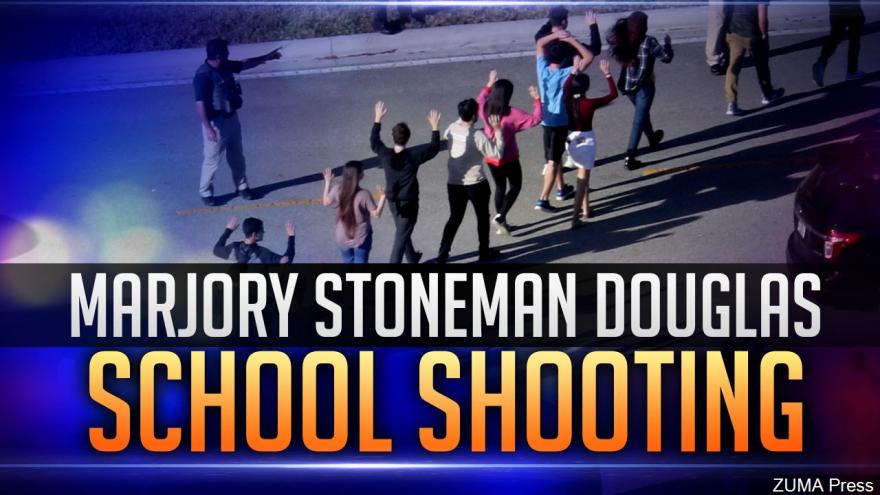 SUNRISE, Fla. (AP) — The sheriff overseeing an investigation into the Florida school massacre defended a law enforcement official Thursday who oversaw the initial response and was criticized for not ordering deputies to immediately charge into the building and stop the gunman.

Jordan was the regional commander overseeing Parkland, the city where the high school is located. Some have criticized Jordan for not quickly taking charge of the Feb. 14 shooting that killed 17 people inside the school's freshman building and for ordering deputies to set up a perimeter instead of confronting the shooting suspect, Nikolas Cruz.

Gualtieri said Jordan "couldn't communicate." Instead, her radio was giving her a series of tones that he played for the commission.

"What is she going to do? This thing becomes a brick," he said, holding up a police radio. "You might as well throw it away."

A similar situation happened after a gunman killed five at Fort Lauderdale-Hollywood International Airport in January 2017. The county is replacing its first-responder radio system, with it expected to be fully operational next year.

The county's radio system played a significant role in hampering the initial response, the commission learned Wednesday. Parkland, a well-to-do Fort Lauderdale suburb, gets police service from the Broward Sheriff's Office, and fire and paramedic service from the neighboring city of Coral Springs, which also has a police department.

Cellphone 911 calls from Parkland go to Coral Springs. Those callers needing police are transferred to Broward County's 911 center. Almost all calls from Marjory Stoneman Douglas High were from cellphones, which had to be transferred. That added about 30 seconds before each reached a dispatcher — if the call wasn't disconnected.

Coral Springs is one of two Broward cities that aren't part of the countywide 911 system. Gualtieri said Wednesday that needs to end.

"The problem is that you have not one truly consolidated 911 center in Broward County," Gualtieri said. "People who call 911 and need help immediately, the person who took the call cannot get them the help they need." He said that is not unique to Broward — it is a problem nationwide, particularly with cellphone calls to 911.

After testifying before the commission, Shawn Backer, deputy chief of the Coral Springs Police Department, told reporters Wednesday it is too early to say whether the divided system created any significant delays in the response. He said Broward sheriff's deputies and Coral Springs officers who responded to the school were quickly able to establish communications.

"I wouldn't say there was a failure of communication. The boots on the ground, the officers that were there, were in contact with deputies from the sheriff's office instantaneously and were able to share information in person," he said.

He said one reason Coral Springs has stayed out of the county 911 system is it doesn't want to lose the "hometown feel," relaying a story about a woman who drove into a city canal. She didn't know where she was but the Coral Springs dispatcher figured it out by the landmarks she saw, something a county dispatcher would not have been able to do.

Commissioner Max Schachter, whose son Alex died in the shooting, said the systems need to be merged because any delay is unacceptable.

The commission, which includes law enforcement, educators, a legislator, parents of slain students and others, is in the middle of a three-day monthly meeting as it examines the massacre's causes. It will issue a report by the end of the year and make recommendations to prevent future school shootings. The commission is scheduled later Thursday to discuss the state's gun purchase laws and its mental health system.

Cruz, a 19-year-old former Marjory Stoneman Douglas student, is charged with 17 counts of first-degree murder. His attorneys have said he would plead guilty in exchange for a life sentence without parole. Prosecutors are seeking the death penalty.