Officials ask drivers to stay off the roads 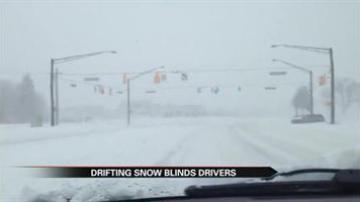 CASS COUNTY, Mich. --  The toll road and a number of counties are advising drivers to stay off the roads due to extreme drifting snow conditions.

Cassandra Stauffer, a Cass County resident, had to venture out on the roads for work, but she says its a good idea to stay home if possible.

"Just by the time I went home last night, I saw about five cars in the middle of the road, not even in the ditch."

Indiana State Police say troopers are busy pulling cars and trucks out of ditches and responding to accidents on the toll road.

For drivers, snow on the ground is only half the battle, the bigger issue is the blowing snow.

"There’s no way around it. With the drifts, it is impossible to drive," said Stauffer.

In Cass County, white out conditions are so bad, people are wrecking and abandoning their cars.

"It is bad, people are in a hurry to get to places and its just not worth it. Take your time and where over you’re going who ever it is, they will understand, I mean its not worth it," said Stauffer.

Cass County Roads Commission said there are so many abandoned cars on the roads that now snow plows cannot get through.  They say the next step is to tow the cars.