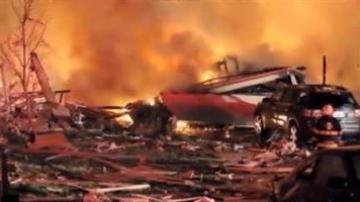 INDIANAPOLIS -- A deadly explosion heard from miles away has completely changed the look of an Indianapolis neighborhood.

Two houses were leveled and dozens more damaged in what looked like a scene out of a major blockbuster movie.

At least 80 homes in the area were affected. The explosion happened late Saturday night on the city's South Side

Two people were killed and several others hospitalized. The cause of the explosion is still a mystery.

Homeland security officials said it was not a bomb or a meth lab.

Officials said the investigation could take several weeks. The damage is estimated at $3.6 million.