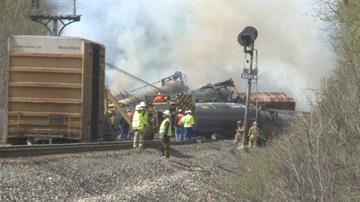 NOBLE COUNTY, Ind. – In the aftermath of Tuesday morning’s train derailment that left 21 rail cars off the tracks outside of Ligonier federal and state environmental investigators were on scene to see how much, if any, contamination was caused by the possible leak of hazardous chemicals.

Officials explained that, throughout Tuesday, the biggest environmental concern was smoke and toxic fumes billowing from burning cars that carried molten sulfur.  The hazardous smoke forced six nearby homes to be evacuated, kept emergency crews from cleaning up the entire area and kept environmental officers from conducted tests to see how much sulfur may have leaked from the cars.

The cars carrying the molten sulfur were allowed to burn due to concern throughout the day that if firefighters were to pour water on them it would cause further contamination of wetlands and water near the scene.

By late Tuesday night, environmental experts with Norfolk Southern Railroad determined that the fire on the sulfur cars could be extinguished by burying them, smothering the smoke and the smoldering sulfur.

“Right now we’re still evaluating, we’re taking water samples,” Elstro explained.  “We believe that as the sulfur cools it will fall into the silt which will then allow it to be cleaned up.”

Until investigators get the chance to get closer to the cars and the chance to run tests throughout the area, the level of contamination from chemicals that may have been spilled in the derailment will take some time to determine.