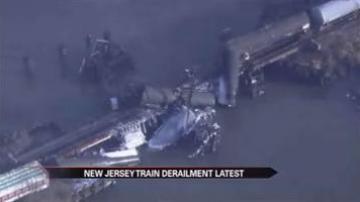 Officials are monitoring the air quality after a toxic train derailment in New Jersey.

One car was pierced and released vapors of more than 12,000 gallons of toxic chemicals.

Agencies focusing on the clean-up continue to monitor air quality, but residents in a 12-block radius had to be evacuated.

"The engineer tried to key in the signal three times but he did not get a green light or proceed signal, he called dispatch over the radio and received approval to cross the bridge and pass that red signal," said Deborah Hersman, Chairman NTSB.

The Coast Guard could not give a range of how long the clean-up could take.