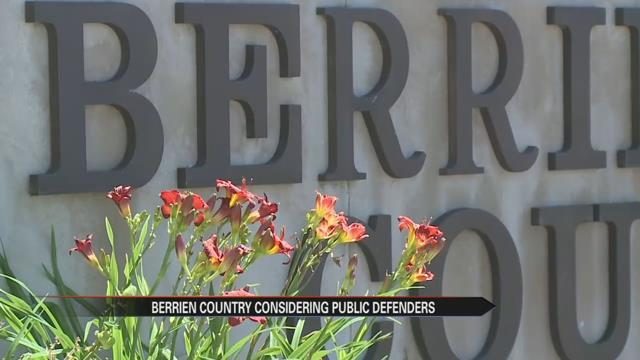 If you’re charged with a crime and can’t afford a lawyer in Berrien County, a couple of officials are hoping to open up a public defender's office in town.

According to court officials, they estimate that 85-percent of people who are charged with crimes in Berrien County need a court appointed attorney.

The idea was presented to county commissioners last week and following a recent law, the state of Michigan would help pay for the department.

On Tuesday ABC57 went to the courthouse to ask half a dozen people what they think of having a public offender's office pop up in town.

One lady who was walking out of the courthouse said she pleaded guilty to a crime because she didn't understand all her options.

Mary Thomas said, “When you want to go home you plead guilty."

Alexandra Koehn: "Is that what you did?

Thomas claims she took a plea deal in a drug case because that was advised by her court appointed attorney.

Thomas said, “But then it still got on my record and it ruined some of my life because guess what, I can’t get a job now.”

Thomas said she didn't understand the process or what was happening in court.

Today she wonders if a public defender would have dedicated more time to helping her understand the law. She explained to our reporter the things she didn't understand.

Berrien County Trial Court Judge Gary Bruce has to decide the fate of people like Thomas every day.

Bruce said, “If we had a public defender’s office, their lawyers in their office would be devoted full time to this work, the lawyers that are doing it now are private attorneys, they contract with us and provide a service, they cover the cases.”

At a recent Berrien County Commissioner's meeting, a presentation was given on the matter.

Bruce said, “The system that we have now, there are some very good lawyers but also there’s no oversight. There’s no management, and there’s no structure.”

Bruce feels that the defense should be separate from the courts.

Bruce said, “As a judge, we’re not playing the game we’re refereeing the game. And so we want to make sure the playing field is level.”

Bruce said opening the office is projected to cost more for the county on the front end, but hopefully save taxpayer dollars down the road.

Bruce said, “It might cost a little bit more money, but Muskegon County which is very similar to us in statistics, is already doing it, for about $175,000 a year more than we’re spending.”

Ashley Lowe said she had a great experience with her court appointed attorney.

Lowe said, “He helped me with my case, I had driving on a suspended license second offense and helped me get it dropped down.”

As a single mom, Lowe said she is very appreciate for the help.

Lowe said, “I was able to go and get my license, and now I’m able to go back and forth to work, and do other stuff for my kids.”

The Berrien County commissioners have not made a decision, but the contracts are up at the end of the year.