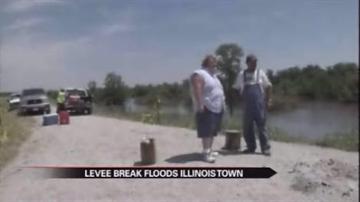 GRAND TOWER, Ill. -- Officials in a small Illinois town are closely watching river levels that could rise and flood the town.

A break in a levee near Grand Tower forced waters through toward the other side of town.

The Army Corps of Engineers is estimating it would cost a million dollars to replace the city's lock.

"We'll do what we have always done. We will shove it full of rock, beg, borrow, and steal whatever we can to maintain it and hopefully the state, the higher-up people, will see what's going on here and, they've been good in the past about helping us out," said Grand Tower Mayor Mike Ellet.

The broken lock was built to last about 50 years and is about 70 years old right now.