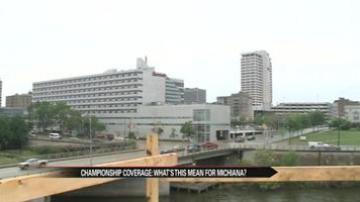 SOUTH BEND, Ind. -- Even though the Lady Irish didn't take home the win in Nashville from UConn, their appearance will still affect Notre Dame, as well as the city of South Bend.

Dennis Brown, the spokesman with Notre Dame, says when it comes to recruiting students, any college nationwide does well when they have a national championship on the board.

But he says with Notre Dame, they see a significant increase when it comes to football.

"It's not a huge bump in applications and recruits, but it does happen. Certainly with football it brings more, though," says Brown.

Now something that does see a significant impact is the city of South Bend.

City officials have been working hard to cast new light on South Bend and with this Final Four appearance, it can only mean good things for the city as a whole.

"It's great advertising for the city, and for the university," says Deputy Mayor Mark Neal.