Ohio carries out first execution since 2014 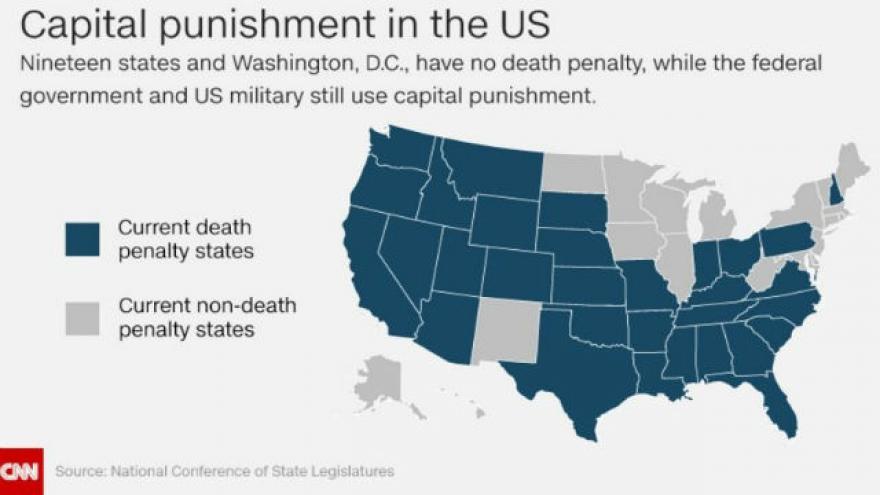 Nineteen states and Washington, D.C., have no death penalty, while the federal government and US military still use capital punishment. Photo courtesy National Conference of State Legislatures

By Eric Levenson and AnneClaire Stapleton

Phillips, 43, was put to death at 10:43 a.m. at the Southern Ohio Correctional Facility near Lucasville. He was convicted of raping and beating to death Sheila Marie Evans, the 3-year-old daughter of his girlfriend, in 1993.

Wednesday's execution was the first in Ohio since 2014, when Dennis McGuire was given a combination of midazolam, a sedative and the painkiller hydromorphone. McGuire appeared to gasp and convulse for roughly 10 minutes before he died, according to reporters who witnessed his death.

Controversy over drugs in executions

Ohio is one of a number of states that have struggled to acquire the drugs used during lethal injections. Generally, states have relied on a three-drug cocktail: a first drug to put the prisoner to sleep, another for paralysis and a final agent to stop the heart.

But the drugs used in those three steps became more difficult to acquire several years ago when European-based manufacturers banned US prisons from using their medications in executions.

Phillips was executed with a three-drug cocktail of midazolam hydrochloride, rocuronium bromide and potassium chloride, the Ohio Department of Rehabilitation and Correction said.

On Wednesday morning, the inmate appeared calm and spoke with guards as IVs were put into his arm, said a reporter who witnessed the execution. Phillips gave a thumbs up to his family and the witnesses before reading a final statement apologizing to the victim's family, reporters said.

"To the Evans family, I'm sorry you had to live so long with my evil actions. All those years I prayed you'd forgive me and find it in your heart to forgive and have mercy on me," he said, according to the Department of Rehabilitation and Correction.

"Sheila Marie did not deserve what I did to her. I know she is with the Lord and she suffers no more. I'm sorry to each and every one of you that you lived with this pain all those years."

Renee Mundell, the half sister of the victim, said afterward that the execution appeared "too easy" and that she had "mixed feelings" after witnessing it.

Asked if she had forgiven Phillips, she replied, "All I can say to that is we have a very forgiving God."

Tim Sweeney and Lisa M. Lagos, attorneys for Phillips, said he had committed an "unspeakable" crime at age 19 but had since become a better person. Phillips recently earned his certification to be a minister, they said, and was preparing his first sermon.

"Ron's case suggests we should thoughtfully reconsider our laws that permit the harshest punishments for those who committed their crimes as teenagers, especially the irrevocable punishment of death," the attorneys said in a statement.

Allen L. Bohnert, one of the attorneys representing death row plaintiffs challenging Ohio's lethal injection protocol, said the state had "experimented" by using midazolam in the lethal drug cocktail without clearly knowing its medical and chemical impact during the process.

"Ohio should heed the warnings of numerous pharmacists, pharmacologists, and anesthesiologists -- rather than relying on alternative facts -- and immediately halt any further use of midazolam and the paralytic drug in lethal injection executions," he said.

CNN's Dave Alsup and Kelly Christ contributed to this report.