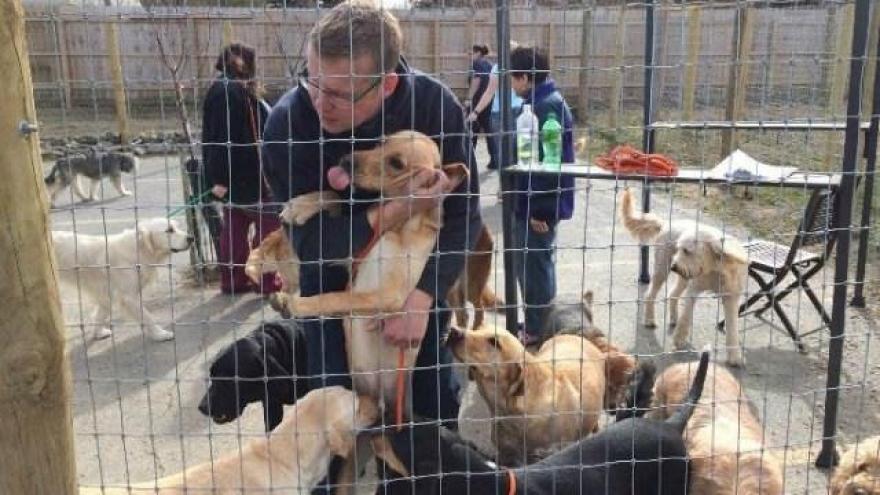 Maumee, Ohio -- A Maumee business is helping people and their pooches. A Walk In The Park Doggy Daycare opened last year. It's a true labor of love for the man who started it, and he dedicates every waking hour to the dogs.

To say this is a way of life for Dirk Broersma may be an understatement, "I am here seven days a week. Around the clock. I sleep here with the dogs. I love the them, I love working with them. I get a tremendous energy from them. They are truly amazing animals."

It all started with a young Pit Bull puppy that dirk and his wife adopted and trained. After people saw the results, they asked for his help.

He's been training dogs for about 15 years now .His wife died several years ago, and dogs became his official business about a year ago, "If a dog is a little too exuberant or a little to shy they have to learn how to interact with other dogs. We work to get their focus first. Of course with the big group of dogs we have here it is very important to keep their energy level under control. We always say a tied dog is a good dog."

Dirk says most dogs want to the do the right thing, they just need some guidance, "They may chew up the room, they might jump on things or bark too much. They could be too energetic. It is often because their people don't work with them enough. It's pretty predictable how a dog will respond. It's often people not being aware of how what they're doing affects their dog."

That's where Dirk, his staff and volunteers come in. Time at A Walk In The Park isn't just about having fun, "I think what's different here is the amount of effort we put into training and working with all of the dogs. It's not just about socialization. We don't take aggressive dogs, but we can sometimes deal with dogs that don't work at other daycares because of their energy levels and lack of training."

While most of the dogs have homes, some are from shelters. Dirk works to get them forever homes. One of the many dogs Dirk has helped was adopted by Gregg Radaker, "Dirk, he's very passionate about what he does. This place has changed my dog immensely. He was deemed unadoptable. It was really just because he needed training."

Gregg says thanks to the help of Dirk, his dog Jones is now close to perfect!, "Some people have natural talents for something. I think this is his calling, and it's great to see."

Dirk says Jones' story is one of his favorites, "I am so happy he got a great home with Gregg and his other dog Yukon. Jones is a great dog. He loves people, he loves other dogs. He is such a great spirit. He truly enjoys every day, and he's the life of the party. He is always happy." Dirk has a lot of happy customers, both the dogs and their owners.

If the site looks familiar, that's because it's the old Toledo Area Humane Society. In addition to training, daycare, grooming and overnight stays, there's also a pick up and drop off service. So just like your kids, your dog can get a ride to and from "school."