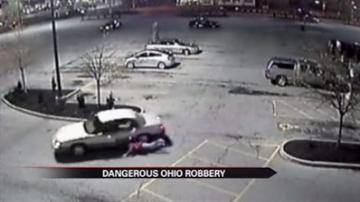 WHITEHALL, Ohio — An Ohio woman's errand run turned into a run for her life after someone tried to steal her purse.

The event was all caught on a grocery store's surveillance video.

The woman was in the store's parking lot when a man grabbed her purse and jumped into his car but the woman does not give up the fight.

The purse thief pulls away and drags the victim.

Here is how she described scenario to 9-1-1 dispatcher.

"I was getting in my car. I put my groceries in my passenger's side and went to get in the driver's side and he ran up behind be and like no, no, and he was like give me your purse," said the victim.

The man did get away with the woman's purse.

The woman told authorities she was punched in the head several times but she was not seriously hurt.