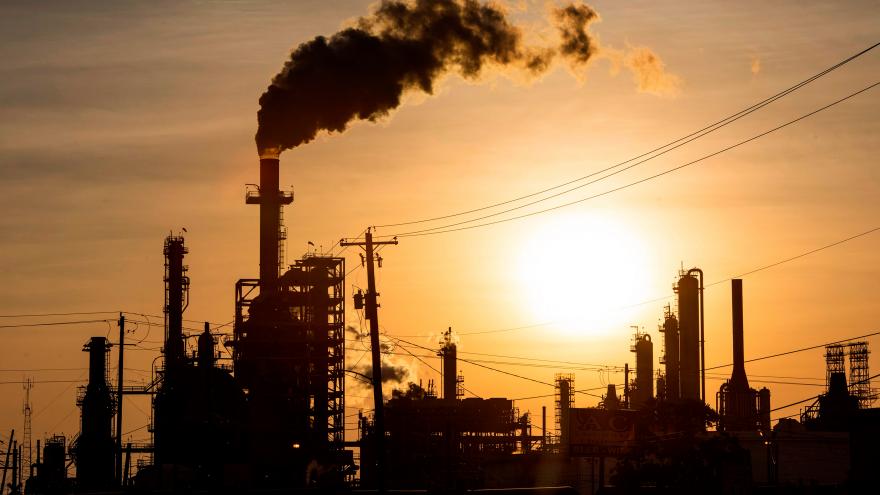 (CNN) -- Want to know just how serious a blow the coronavirus pandemic has dealt to markets and the economy? Look at the price of oil.

On Monday, US oil to be delivered in May settled at -$37.60 per barrel, the first negative close in history. That means producers, which are running out of storage space as demand for energy collapses, are willing to pay buyers to take crude off their hands. That's never happened before for West Texas Intermediate futures, the US benchmark.

The price of a barrel of WTI crude to be delivered in May has since turned positive. It settled Tuesday at $10.01 per barrel, a drop of 84% from its recent high in January.

The contract closed Tuesday, which means trading was light and most investors were looking ahead to June. But this isn't just a case of odd market mechanics. The price of a barrel of WTI crude to be delivered the following month also plunged. It settled down 43% at $11.57 per barrel. At one point Tuesday, June oil fell as low as $6.50.

Brent crude futures, the global benchmark, dived below $19 per barrel on Tuesday to their lowest level since 2002, a nearly 26% decline.

"[I'm] shell shocked," said Bjornar Tonhaugen, head of oil markets at Rystad Energy. There is normally some volatility at the end of a contract period. But this indicates that the oil market is "officially broken" as storage piles up, he said. There's particular concern about how much space is left in Cushing, Oklahoma, the delivery hub for WTI.

The effects of dirt cheap crude will ripple through the economy. Even in a $20 oil environment, 533 US oil exploration and production companies will file for bankruptcy by the end of 2021, according to Rystad Energy.

The problem isn't going away. No one can say when demand for oil will recover. And even once the lockdowns end, it will take some time for refineries to get back up to speed, Tonhaugen said. Similar issues could arise when the June contract comes due in a month.

"There's a lot of oil and no real place to put it right now, so no one wants to take delivery of it," said Randy Giveans, a Jefferies analyst.

As onshore storage fills up, Giveans has tracked a boom in floating storage where traders and producers can stash oil to deliver at a later date for a higher price.

Over the past 10 years, traders or producers would typically spend $25,000 per day in April for a supertanker, or VLCC, which can store 2 million barrels of crude, according to Giveans. That price has now jumped to about $150,000 per day, a sixfold increase, he said.

"We've seen more contracts [for floating storage] in the last four weeks than for the past four years combined," Giveans said.

The incredible dislocation in oil markets is a sign of just how much the coronavirus pandemic is upending investors, even as stocks have stabilized. The effects could be felt for months and years to come.

"This is very reminiscent of a time in the mid-[19]80s when exactly the same situation happened — too much supply, too little demand and prices of oil stayed low for 17 years," former BP chief John Browne told the BBC on Tuesday.