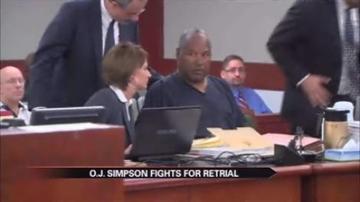 LAS VEGAS -- OJ Simpson was back in court to ask for a new trial on his 2008 armed robbery and kidnapping charges.

The 65-year-old shuffled into court with a team of lawyers at his side.

Simpson says his former attorney never told him about a possible plea bargain.

The former football star even says the attorney gave him the go ahead to confront the men selling Simpson memorabilia as long as no physical force was used.

"He had given prior advice to OJ Simpson regarding how to get back his stuff and that advice was never part of the trial," said Dana Cole, ABC News legal analyst.

Simpson has served four years of a prison term that could last 33.

He is expected to testify Wednesday.

His former attorney will take the stand on Friday.