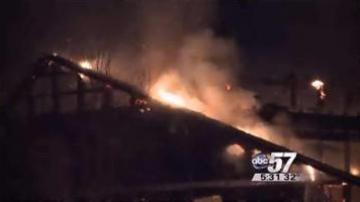 EDWARDSBURG, MI. – An old fertilizer and bulk chemical facility went up in flames early Wednesday morning, calling in several departments to put out the massive fire.

Flames ripped through the building, located near Edwardsburg High School, on Section and Max Streets, around 2 a.m.

Crews had the fire under control within forty-five minutes, but thick plumes of smoke could be seen pouring out of the building for nearly two hours as firefighters worked on hot spots.

Edwardsburg Fire Chief Bruce Stack said bins with fertilizer byproduct were inside of the building, so they were concerned about breathing in the smoke.

There was no concern, however, about an explosion due to the chemicals.

“We try to stay out of the smoke as much as we can. It’s a neutral chemical in there right now, lime and hot ash, so we don’t have an explosive factor in any of it,” said Stack.

No one was hurt but Stack said a firefighter was treated at the scene for minor heat exhaustion.

Investigators had not determined the cause of the fire as of Wednesday morning.