Older man punched by teen in Goshen caught on camera 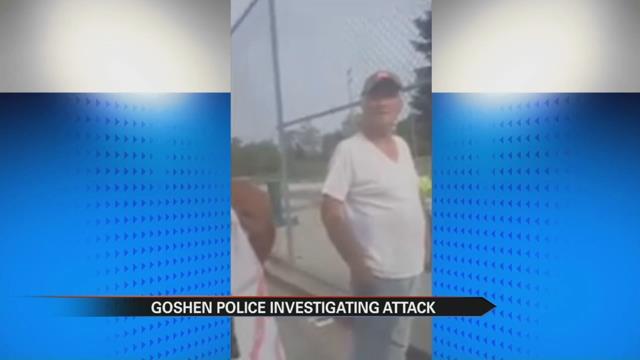 Goshen Police are investigating an incident of an older man being attacked by teens. Video of the attack made its way on Facebook and on Tuesday landed in the hands of law enforcement.

Police say the community's reaction on social media helped them find and interview both the victim and the underage suspect.

Video that was posted on the Goshen Police Department’s Facebook page, Wednesday morning, shows a group of teens watching as an older man is attacked by another teen.

Although audio is missing from the video the sight of the older man being sucker punched as others just watch shocked the community.

“It’s hard to watch and I think people are hoping a hero would step up in that moment and do something about it,” says Shawn Turner, Division Chief-Patrol with the Goshen Police Department.

Instead of a hero stepping up, a cell phone was pulled out.

“Through the video alone we have ascertained that the individual was knocked unconscious for at least a couple seconds and then suffered some injuries,” says Turner.

A concerned citizen brought the incident to the police on Tuesday.

A witness to the attack says there is more to the story.

“This wasn’t gang violence. No money was involved it was a group of kids that wanted a drunk man that was making them feel uncomfortable to go away,” says witness Jonathon Readd.

Readd says about three weeks ago he and friends were hanging out at the pavilion at Rodgers Park when they encountered the victim.

“We tried to go away from him and when he followed - that was after being told like three or four times. So when he came over here he was told a few more times by the whole group and still wouldn’t go,” says Readd.

On social media the video without sound doesn’t convey that.

Police left out the audio for legal purposes but Division Chief Turner says it also makes the video harder to watch.

“The audio makes it worse especially for the victimization of the person that was punched,” says Turner.

Police say Rodgers Park has been a problem park and they have upped patrols. They don’t want the community to feel like they can’t enjoy a public place.

Police also add that the suspect could face aggravated battery charges and that information should be released by the end of the week.