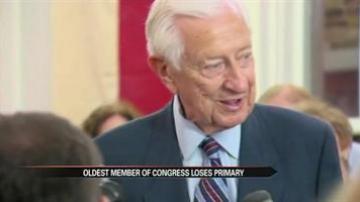 ROCKWALL, Texas -- The oldest member of Congress lost a bid to keep his seat.

"I just got whipped; I got beat. And my folks are sad but they know that I'm not. I'm pleased to have had the opportunity. I don't know anything I can say other than God bless all of you, everyone of you. I love every doggone one of you," said Hall.

Hall was first elected to the house in 1980 and was vying for an 18th term.